I absolutely love the image Robyn Hitchcock has painted for his new album, Love From London: 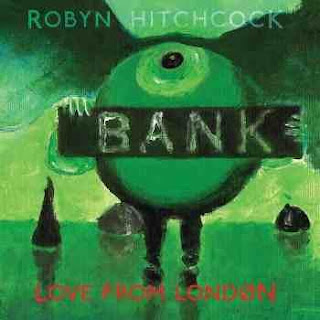 I like the joy of my perceived meanings behind it, and of course the skill of the artwork alone. On a personal level, it resonates/represents something to me as well. The t-shirt too: 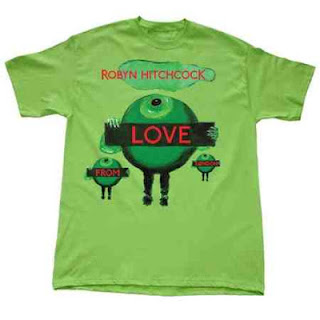 In times when download vouchers are given to me as birthday presents, or I overhear people justifying their 'still' buying CDs as if it is absurd unheard-of behaviour, it's a fine feeling to fall in love with album artwork. I've written before about the wonder of bands like Joy Formidable who use the art of physical music artefacts to their advantage in selling records - selling one-off hand-painted/numbered Christmas singles, or specially wrapped live albums that come with one-off band t-shirts, or the absolute: selling a new release in limited quantities with broken bits of the singer Ritzy's smashed-up-on-stage guitar! And British Sea Power are the epitome of/experts in releases/design/merchandise, and it really adds to the feeling of uniqueness/romance about the band.

Needless to say, I have fervently rushed to order both albums by Hitchcock and BSP couple of months before release date - the latter direct from the band; former from the noble Yeproc Records. It's very rare that I take excited interest in the very release date of a new album nowadays, but this feels very much like an event, combined with Robyn's 60th birthday shindig gig set for the end of the month - as does the upcoming British Sea Power tour and album. It was luxury and reward to be able to spend the first bit of my wages on some things as wonderful and life-affirming as these. If I could, I'd travel the country a fair bit following both tours.

I love the many songs that Robyn Hitchcock has written about London, and how in recent years the timing and locations have had such poignancy to me, and make the very streets I tread reverberate with meaning, poetry, definition. I suppose spotting him about, or hearing of his frequenting/enjoying certain corners adds to enjoyment and love of these areas that perhaps haven't been celebrated so much, particularly by recent songwriters.

The new songs from Robyn have come right up and hugged me. A recent session on an American radio show was just perfect, and I'm looking forward to catching up on the Daytrotter stuff he did last Friday too.

Posted by All Thrills No Frills at 11:13