I'm on a post-record shop high. I've come back with original 80s vinyl albums, a recent-ish vinyl single, and a live CD album, plus various flyers and free music magazine publications that I otherwise would not come across - plus importantly, I feel much cheered up.

In the current times, I was half-wary that I might walk up London Road to find Collectors Records shutdown, but thank god it was still there. Some good chat with Keith the owner as usual. When he consults his Record Collector book to assert facts, it's kind of humbling and wonderful - because young people would just whip out their mobile phones and hit on the Wikipedia website. It's sad to think that actions like that might not live on many more years. But you cannot beat in-person knowledge that you also get in record shops, and the click of like-minds.

I'm afraid I can't boast an eclectic roster of purchases to dazzle you with, as the allure of the H section of vinyl led to surprise finds of original Robyn Hitchcock albums, and I was hooked as usual. It's funny that for a stretch of a couple of years I could not track any of his albums down, even on CD, but in the last year they seem to be like psychedelic painted buses. I hadn't intended to spend as much as I did, but I know that had I turned my back, they would be gone by my next visit. I'm well aware that all these songs were re-released digitally via his site, and I even own a run of three or four songs from the first of the tracks here - but damn, the vinyl sound, all the tracks I don't know (for it is a compilation and not a standard album), the splendid artwork, and the mad liner notes which I will later get a certain person to read out to me perfectly later....

The album cover in its vinyl-size glory bowled me over to prove irresistible too. Robyn Hitchcock offering me a bunch of radishes, how can I refuse? AKA, they don't make overwhelmingly imaginative pop stars like this no more: 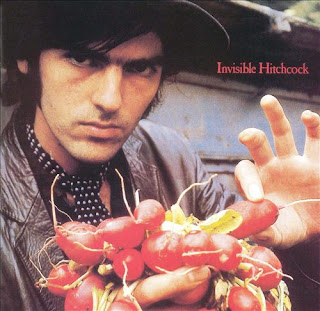 I also took up Groovy Decoy, a revised version of (plus bonus tracks) Groovy Decay, the latter being one which I had been thinking about needing recently. The album art for Groovy Decoy isn't nearly as marvellous as the original Groovy Decay, and I need to hear it as it orignally was, so that shall have to be bought up at some point too, despite how its seen by author, and others. 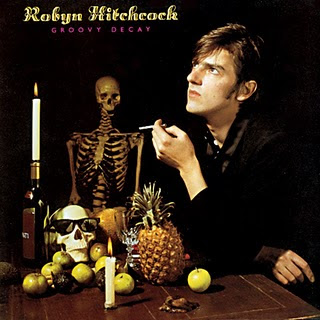 Listening to the above now. Getting giddy about the next Robyn Hitchcock gig again - his 60th brithday celebrations.

There are countless ingenius song titles from Hitchcock. Favourite tonight is: Point it at Gran.

The other records I bought were Nighthawks at the Diner, a live album by by Tom Waits, which is jazzy, mellow but amusing so far. And I took a risk on a new release seven inch single, because I needed change for the train machine! Not a convincing excuse, but... I always try to buy even just a little something when I am near Banquet Records in Kingston, a fanzine, a single... This was by Teenagers in Tokyo, which sounds so Cure-like with its sweet pop keyboards and perfect bass, I love it, the b-side of Long Walk Home, mainly.

Robyn Hitchcock is yelling: Kevin! Supper's ready! now, so I've got to go....

www.collectorsrecordskingston.co.uk
Posted by All Thrills No Frills at 10:57