Just read in the CAMRA official publication that The Grosvenor pub in Stockwell, south London has been sold to a property developer.

I fear about the future of pubs in general, have done for a couple of years, and seen and felt so many negative, dramatic changes, or losses - especially to music venue pubs.

I had a sad day for favourite London pubs yesterday - first a visit to The Hope and Anchor yielded the fact that it now resembled one of those identikit looking swish eating pubs - all the historical music posters from the punk 70s and post-punk 80s have been removed, replaced with Breakfast at Tiffany's style dainty wallpaper. This isn't what I want as a music fan - The Hope and Anchor was a wonderfully old, historical music pub, famed for its venue, and loved by me (and by many others, I'm sure) for its jukebox music, and rock pub feel, plus pool table upstairs. It was the pub I always took friends of indie/musical mind to, place have a pint and a talk about music, with decent music, and maybe a game of pool soundtracked by decent music. Thankfully, the gig venue remains, as does the jukebox (not sure about the pool). The basement gig venue is the place's heartbeat. Pretty much every punk/new wave band has played there, and there are innumerable new bands starting out from here still. 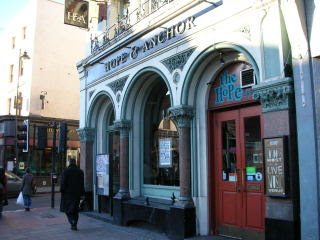 But it's just not the same in the main room of the pub. It's all too sensible now, and has lost much of the feel that made it totally unique, famous, a place to want to go out of your way to go to if you were not local (when I was local, I was in there so much, it's the only place I've ever drunk in where I'd go up to the bar, and they'd already be pouring my favoured pint).

I don't mind that it might serve food to survive - god knows pubs need to do what they can to survive in these harsh times, and food is useful to the drinker - but to strip this landmark pub of its history is unforgiveable, and beyond belief. I saw this happen to The Half Moon in Putney, and I find it too distasteful to go back now it is a wine-glass/napkins-on table eaterie with so much faux decoration and all the musical history torn out - plus, it's painted the most depressingly drab grey in the world (over its beautiful Victorian red brick).

Also yesterday I was floored to walk up to Filthy McNasty's with a couple of its fans in tow, to see that a sign had been put up: COMING SOON! MEAT LOVERS' PUB! A bit of investigation asserted that the pub has indeed been sold. Also, merely looking inside the windows you could see that all the historical music posters had been completely removed - in favour of stark white walling. The place looks completely devoid of character so far. And as a non-meat eater, it will never get my custom in my lifetime. I'm guessing a new food pub won't launch itself under the original name of Filthy McNasty's...

Again, another significant pub. Owned in part, I believe, by Shane MacGowan of the Pogues, and a place where there was always a good atmosphere, and a welcome if you were an alternative music fan. A place that hosted book readings, off-kilter gigs, showed films, and was just generally an individual place to enjoy the night. Lost forever. Its owners do still have the Boogaloo up in Highgate, thank goodness (let's hope that legendary joint is secure). And there is also the New Rose down on the Old Essex Road, which is nearby to Filthy's but that place is not quite the same in look and feel. However, it does play excellent music (yesterday enjoyed a slew of stuff, mainly 60s garage rock and pop, and some newer stuff. Particularly The Box Tops' The Letter, and Let's Pretend It's Summer by the Brian Jonestown Massacre - tell me anywhere where you can hear all that of a casual afternoon!), and it is helpfully located a stone's throw from a couple of excellent record shops (Haggle and Flashback Records).

So, three London pub blows in one afternoon/evening for me yesterday. The future feels quite threatening, and so so sad and empty. That's why it is a political act where you choose to go and what you choose to do. Supporting your favourite (and especially those that are independent or small in operation) pubs, shops, etc is more crucial than ever. Rising prices for pints and pretty much in everything else, plus so many other factors (rent, wages, licensing laws, the smoking ban), have throttled pubs' abilities to survive so much. But should this really result in pubs becoming identikit or dull/conservative looking over-priced/unaffordable dining houses? Is that what people really want?

Under this government, property sell-offs and development are like a (cold) soul to everything. Anything that can be bought up and refurbished or sold for big bucks seems to be in danger of being up for the taking when times are tough - but how many more ugly looking mini/express big-name supermarkets and 'luxury' high-rise flats do we need? It feels like gentrification has taken over, and beyond the loss of communal places like pubs/cafes/libraries, lies not only the loss of community, but moreover for crass money-orientated individualism to succeed over all - combined with other current factors (and many more just kicking in), so many people are going to be pushed out of the city of London unless they are rich. The message seems to be clear: rich people welcome, we want to cater for you above everyone else.
Posted by All Thrills No Frills at 07:02