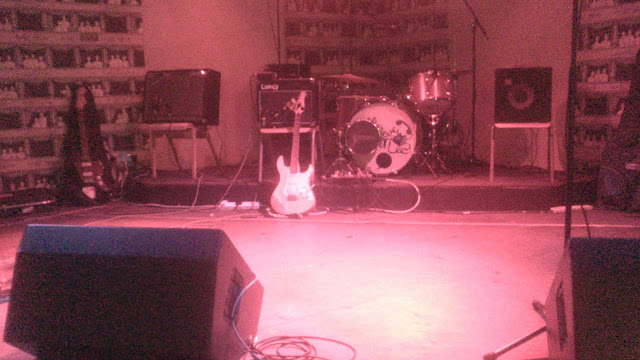 The Half Moon in Herne Hill is a stone's throw away from Brixton. It's a stunning, historical pub, with a brilliant backroom for gigs. Last time I was here was for an all-day shoegaze/dream pop festival with a record fair. I was thrilled when one of my favourite current indie pop bands, Allo Darlin' announced a 'compass' tour of London - playing in four different corners, north, east, west, and here in Herne Hill: south (west). Tickets were instantly bought. 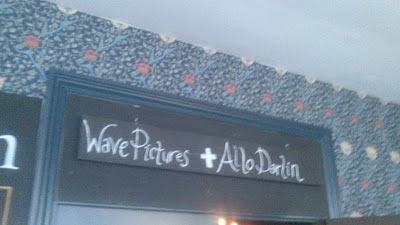 it's so nice to have a gig that is not in the typical, clichéd, 'cool' places of the moment like Shoreditch or Dalston - moreover, this was a pretty local gig for me, and travel was a joy.

I'm afraid the night was tinged with a little sadness, though, since - whilst looking online for stage times - I had come across a website noting the possible plans to convert the gig room into flats ! This trend - and the trend for converting pubs into mini, big chain supermarkets - is heartbreaking to a music fan like me, who thrives on tiny gigs. So I made the most of being in the venue with the utter privilege of this wonderful, fun band tonight. I took photos of the venue, although sadly it was too dark to capture the golden stars and chandeliers adorning the ceiling. I got a nice red-lit shot of the stage before the bands came on. And those plush, turquoise velvet curtains surrounding the stage too. 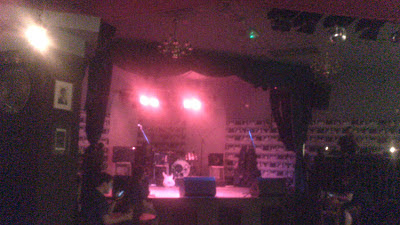 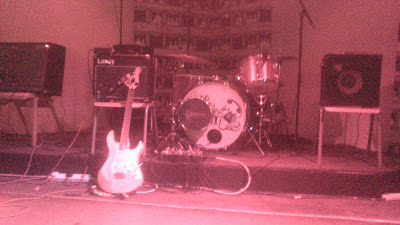 It was such a fun gig. This was my third Allo Darlin' gig, and the band always put a smile on my face. Elizabeth Morriss's own smile, and her pure, obvious enjoyment in singing and playing is so infectious. The new song sounded so strong. Since I didn't have names to note down set-list style, I, er, just wrote down the themes of the new songs: being stronger, nostalgia, Australia, living in a cupboard. The Allo Darlin indie pop songwriting skills are at work, so much melody, energy, and genuine emotion. Elizabeth Morris has one of my favourite singing voices, lots of warmth and feeling.

Sad for the blurriness of these photos, but we are lo-fi here. 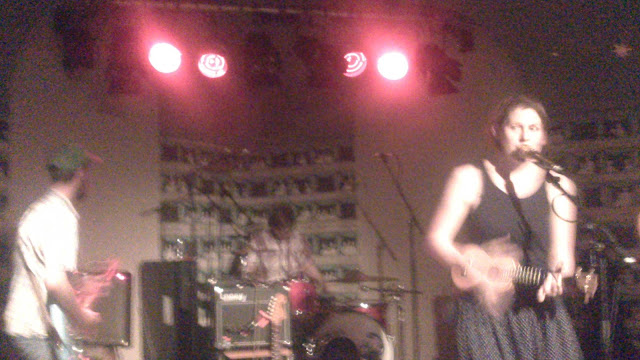 The Wave Pictures were in support, with Darren Hayman style vocals, and songs of Johnny Cash's shoes, and whisky, and tales of the heart.

I had a good time, chatting to the Fortuna Pop people, who were kind to put the paper zine of The All Thrills No Frills Music Bill on their merchandise stall. Allo Darlin are featured in two issues! Another Fortuna Pop band, Tender Trap are also interviewed in issue two of the zine. Nice to bump into two people that were dining with Tender Trap and us the night we interviewed them, including a sound engineer for various bands including The Wave Pictures and The Lovely Eggs, and a DJ from Atta Girl club. I passed some zines on to be sold at the next Atta Girl club night, in Birmingham, which is this coming Saturday 22nd, at The Hare and Hounds pub. Wish I could go! 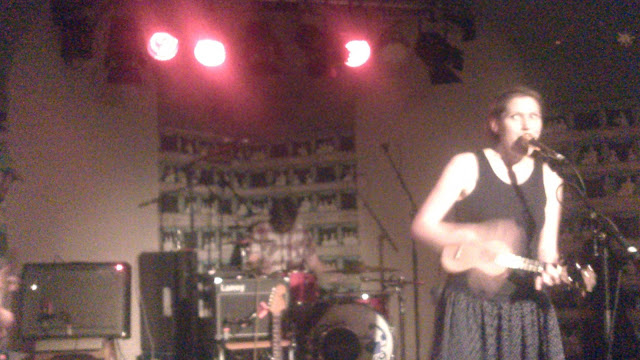 Rounded off the night by transporting myself back to my youth and trying on band t shirts for size in the gig venue toilets! Came home with a bright orange, sunny, lovely Allo Darlin' t-shirt, plus replaced our digital version of the recent, very excellent Tender Trap album, with a physical CD version. And that's how gigs should be, amazing venues, full of community, supporting independent bands and labels and promoters who work damn hard in really harsh times, and where you come away smiling.
Posted by All Thrills No Frills at 09:40