What do you do when you realise you've spent three days listening to a disc that you were led to believe was the new Devendra Banhart album - but is, in fact, by Tame Impala? This album that says Tame Impala on it came in a Devendra Banhart sleeve, and was sealed with cellophane when I bought it... from HMV. 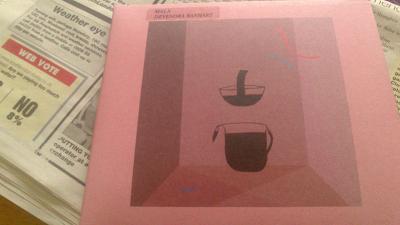 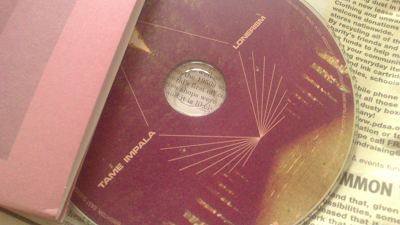 Does this mean someone out there has a Tame Impala sleeve, with a Devendra Banhart disc inside? And are they as confused as me? And do they want to do a swap, jigsaw puzzle style?

This has never happened to me before! I've been buying music from record shops for 20 years. I'd be intrigued to hear any similar tales... It goes to show how music can't always be central to life as I get older, that I didn't notice.

I really do dig this album. From the first listen, I was captured by the very different direction Devendra Banhart had chosen to take. Drums so high and pounding in the mix, electronic sounds, and a very big, fuzzy, hazy, echoing sound that I bet would sound incredible and even more echoing and astoundingly all-encompassing on certain drugs. It sounds so 60s and so Beatles-y, that I just cruised along, merrily accepting that this was Devendra Banhart. The music is very plausible, in its Beatles-like 60s way - he's a huge hippie. It's the voice that I kept questioning. It sounds exactly like John Lennon, especially on the first track. I just ended up assuming there was some sort of John Lennon machine and Devendra had channelled his voice through it. His own voice is much deeper, so this album has been jarring with me a bit and making me wonder, it being so much higher... like it was a different vocalist.

I didn't look at the label on the actual disc much, only the album sleeve, until today. So when I picked the CD up today, from the player, and inspected it absent-mindedly for the first time, I suddenly realised what was actually written on it was Tame Impala. For a split second, I thought it must be a misprint, I'd gotten so used to this album being the latest Devendra Banhart release...

But now I'm in the position where I can't locate any receipt, and I'm wondering: do I want to go in and ask for the Tame Impala sleeve, then wait till I can buy the Devendra Banhart album... Or go and demand my copy of the rightful Devendra Banhart album and let them sort it out with the distribution company... Or keep my wonky, unique musical artefact... No proof that it is the mishap that I say it is, though...

You don't get this fun and serendipity with downloading music, now, do you?
Posted by All Thrills No Frills at 11:59