Not only am I addicted to the new songs from Six By Seven's next album, over at Soundcloud, but I finally got round to fixing up the holes in my Six by Seven album collection (it's perfect, I've only doubled up with one album but plan on gifting it to somebody).

Nine albums for £5?! Courtesy of the band at their website. 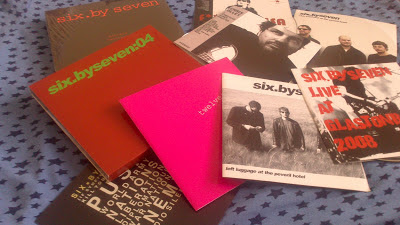 It's a necessary parcel of noisy panacea that I was so gladdened to come home to. Really looking forward to hearing Chris Olley's solo work properly now too.

Onwards to the new album, Love, Peace and Sympathy, hoping to track it down in an independent shop near me ASAP.
Posted by All Thrills No Frills at 08:31

Email ThisBlogThis!Share to TwitterShare to FacebookShare to Pinterest
Labels: 6 by 7, albums, new albums, six by seven