Six By Seven were incredible live last night. Excellent that they came back to a small indie venue like the Bull and Gate. I told myself I wasn't going to be nostalgic, but despite online descriptions about the band being due to play lots of old material, they only played one old song - and I was glad. I was riveted by the unfamiliar songs - the sound was perfect, crisp but menacing bass, and it lent more prominence to the organ, and Chris Olley's voice. I felt like I was enjoying his abrasive singing more than ever - it was clearer in volume, but still as rasping and downright pissed off.

I had a moment where I caught myself getting a bit teary-eyed. I just can't believe this brilliant backroom of a beautiful and historical pub is going go from being a classic little indie gig venue for small, hopeful bands, to a fucking middle class dining room. How can anyone let this happen? Surely some musician or record label type with money would have the sense and desire and money to buy it out and save it, but no one seems to care. I've felt hopeless myself, since the deal was already done before I found out, and also not having the funds or living near enough hinders me. 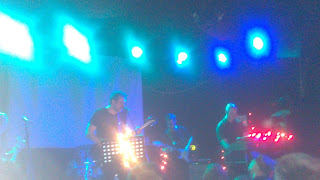 I was getting a bit misty eyed about what I will always look back on as - for me - a golden age in radio, singles, indie labels, music press, and indie bands. But it's not about that - I would still want this to remain a venue for little bands. The support band tonight were testament to why we need places like this - free from gross brand sponsorship and watered down extortionate beer, and not a posers' playground, just good new bands in the backroom of a nice old north London pub. If I ought to be getting misty eyed about anything, it is the way gigs used to be. How you didn't go to venues just because they were in the latest hip cool new part of town, and clothes and image were an aside, and you didn't have to fight to book tickets on the internet half a year in advance and be broke because of the ridiculous cost - just turn up, pay a fiver on the door, nevermind who's on the bill, just investigate new things...

I digress. Six by Seven were even more enjoyable live than I had imagined. Well, I saw them headline over British Sea Power at ULU roughly ten years ago, but I struggle to remember so far back exactly. So seeing them now, I felt so captivated. I was also ridiculously excited right before they came on, and when they first stepped onstage - like I have not felt in years and years.

They really are a unique band, stand alone in what they do. So fierce. And wittily bitter about how they didn't get as big as they deserved (jokes about how Ash supported them at next door's huge Forum venue years ago, and where are they now? Sunning it on a beach in Italy). They are so necessary when indie music in its mainstream form has become so formulaic and helplessly bland, and... for everyone. It feels like music is dead, and they re-affirm striking out on your own.

A lot of the new songs actually sounded so pretty, and they were slow and melodic. I felt in a dream with the fairylights and the church-like music stand, and the swirling lights and music swooning about too. 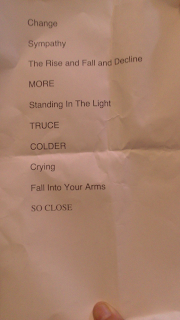 Why wasn't this gig sold out ten times over? Because people still don't get it, and I'd like to say that's part of the attraction with Six By Seven, when really it's just erroneous in people/the media past and present. But, so saying - I honestly thought this gig would be utterly corrosive on the ears.... corruscating; when the new stuff was actually shining with bright melody, even kind of upbeat - so the new stuff could arouse far more interest. Shoegazing is all cool now too, of course..

Possibly more (sophisticated) photos to follow, as I ran into John Marshall, who seems to be at a gig every night of his life and he was snapping away fervently... Now to buy the more recent Six by Seven albums I do not have. New album coming in July!
Posted by All Thrills No Frills at 09:25

Email ThisBlogThis!Share to TwitterShare to FacebookShare to Pinterest
Labels: gigs, six by seven, the bull and gate