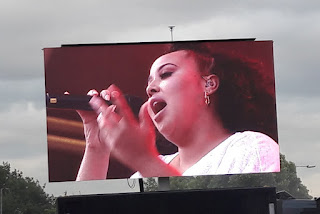 Real Love by Clean Bandit is my summer anthem now. I may be a few years too late, but I just saw them performing live in a park in Tottenham at a gig in support of Labour, and they were a total revelation. 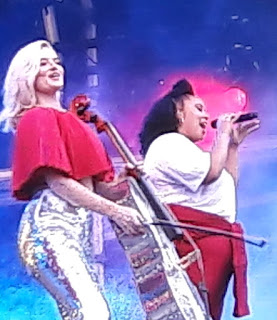 The song lent such an anthemic, apt feel to the event - the hope and good of the Labour Party under Jeremy Corbyn! The band's performance added to the feelings of hope and optimism, and also gave a party atmosphere to the evening.

I had just had the most ridiculously stressful and shitty day at work, with all kinds of drama and horrible incidents. Which had made me late for the gig I was so looking forward to. I needed this night of peaceful messages, hope, solidarity, and love of Labour.

I needed to walk right in the festival gates just as Jeremy Corbyn was delivering his speech, and see his kind face, hear his support and feel the sense that things will change because we so desperately need them to so that so much suffering can end for so many people.

I was only catching the tail-end of the festival, had missed out on seeing Potent Whisper, Owen Jones, Kate Osamor, and many more speak and perform - but it was still such a brilliant feeling to be there, walking around, enjoying the positive mood, having a nice drink, being outdoors in the lovely summer's heat, seeing familiar faces. 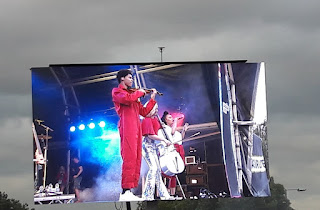 We rushed out to buy an album by Clean Bandit. I wouldn't normally go for such sleekly produced, soulful dance, but they are really amazing and their first album feels like a best of, with catchy tunes galore! I love the mix of guest vocalists, and also the blending of classical instruments - violin, electric violin or viola, cello, and heavy dance beats and electro glitches.
Posted by All Thrills No Frills at 10:30