I have been a fan of Belly since I first heard the band on The Evening Session on Radio One in 1995. King remains a classic indie-rock album with all their best tunes on. Tanya Donelly possesses one of my all-time favourite singing voices - low, rich, high, sweet, strong, vulnerable, warm, ecstatic, fearsome. 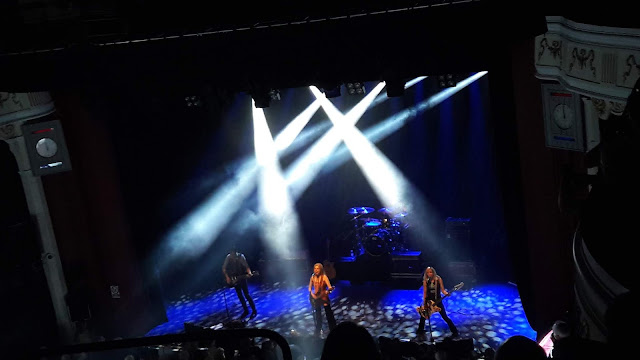 Missed the first part of the show - it was a stupidly early start, I hate to say, with no support band, which had not been clear on the tickets/when booked. A meeting up went slowly and we had to leg it in one song from the interval before part two.

I love venues like The Forum and Shepherds Bush Empire - old cinema theatres, grand, art deco (at least in the Forum's case). We need to treasure and keep using these venues, and not lose them. The plush cinema seats are great, and even from the back - wherever you're sat - you have a grand view.

I was not so miffed at missing out as I had seen the band in their first reformation show in two decades, this time last summer, after all. They blew me away then, as they did tonight.

I adore the new album. Tanya's honeyed voice, the melodies, the themes of the songs. There is no doubt that Belly's return is fantastic.

Bassist Gail was on fine, energetic form, as usual, and Tanya was equally mobile and keyed up as she wielded her guitar. Gepetto was a storming starter as we sat down with our drinks.

Many of the star tracks from King were rocked out again and again across the night. I kept hearing a tease of the opening notes and key to Superconnected but that came later. It is one of my favourites. I sang my heart out about angel wings and throwing clothes around.

Feed The Tree was another fond highlight, and I was caught up in its chorus as ever, enjoying Tanya's demand that some feller take his hat off to her when he's speaking to her. 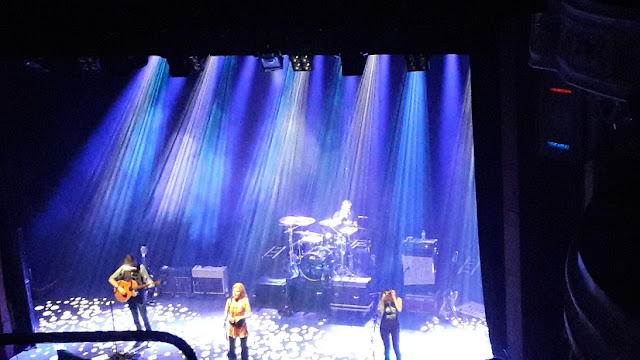 The light shows were brilliant - confetti-like, snow-like at times, glittering on the stage floor. Later on, rainbows (I know from Tanya's Twitter she is a staunch LGBTQ ally).

I had wondered if there would be antidotes to the American President's current policies towards innocent children in need of help. As I type, there has been condemnation by the UN that Trump's policies amount to 'toture' - the camps set up which keep young, vulnerable kids - some of whom are disabled and not getting their needs met - confined from their parents while their parents are treated like criminals, simply for seeking a safer, better life. And, sure enough, both Gail and Tanya spoke out against Trump - and looked to the day when the US and the rest of the world are free of him, punching the air in fighting spirit.

New songs Human Child and Shiny One sounded brilliant and, live, they had sing-a-long attraction.

Full Moon, Empty Heart was the great surprise of the night. Those killer vocals and melodies, that incredible voice of Tanya Donnelly's. It also struck me just how much the band rock - loud!

An amazing night, and so lucky to have the band back. A band I have loved since 1995, but never thought I'd see live, as I was just a year or two too young for gigs then, and they broke up soon after King. I have followed Tanya's solo works and adored all her songs, though. I never went to the Throwing Muses' reunion gig in recent years as I pined for Belly and I think they are a band that should be celebrated and remembered much more.
Posted by All Thrills No Frills at 10:30