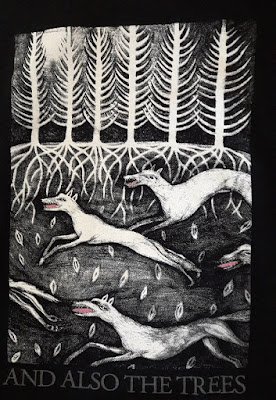 Much like post-punk legends, The Chameleons, I never considered I'd get the chance to see And Also The Trees perform live. I had heard the band mentioned alongside The Cure, and that Robert was friendly with and a fan of And Also The Trees, that the two had toured together - and Lol Tolhurst had produced the band at times. Moreover, that the musical similarities were/are striking. Only in recent years did I hear about the band being active, and - though I missed the chance to see them at the Garage in London a couple of years ago - I started picking up their music at record fairs and online, and became quite fascinated.

That Robert Smith selected the band for his personally curated roster at his Meltdown festival this summer was a brilliant piece of news. An intimate venue, too. 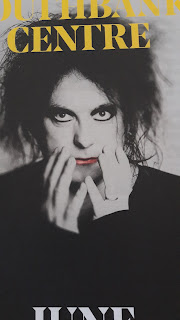 So it was that I sat a couple of rows away from the stage, bathed in amazing purples and glowering reds, entranced by winding, textured, emotively woven musical soundscapes.

Singer Simon Huw Jones cut a stark figure in his frock coat, waistcoat and romantics' pale white shirt. Suddenly, a creak like the coffin lid of a vampiric creature in some gothic tale. 'I like that,' he announced. It was people creeping out to the bar, the heavy doors cranking. The noise came again. 'But not too much.' We laughed aloud.

But the mood was mostly beautifully sombre, dreamy, and filled with silent awe.

It felt like the best band you could see, the closest you could get, to seeing The Cure. My Bloody Valentine might have been pedalling away and creating sensory noise in another building nearby, and Suzanne Vega sounded golden caramel wonderful next door in snatches as I passed by, but And Also The Trees created amazing atmospheres, tension, emotional release, poetic phrasings, all delivered with vocal intent, and it was incredible.

Nice one, Bob, for booking them! (I bet he enjoyed a few glasses of lemonade with the band afterwards).

Support band A Dead Forest Index were not only aptly chosen by name but pleasingly evocative and musically innovative, on a similar wavelength, too. Sadly no guest spot from Bob Smith, but maybe that is happening at today's big gig he's doing.
Posted by All Thrills No Frills at 10:30