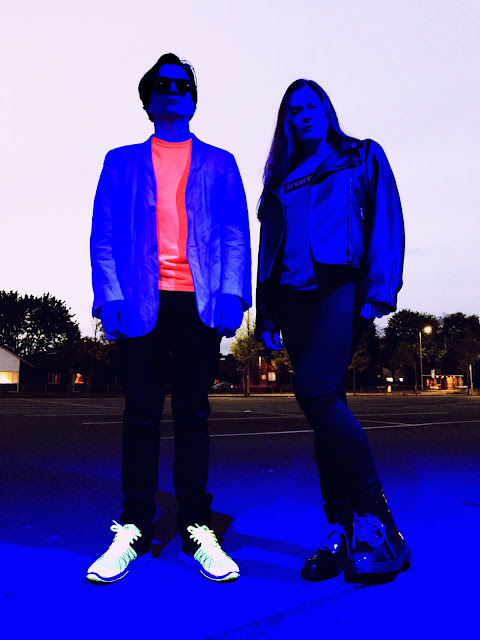 Spray are pop maestros. If you've not heard them yet, it's a sin.

Spray make music for people too sceptical to surrender to dancefloor hedonism but too smitten by electronic pop's fluorescent history to reject it entirely.

Their textured instrumentation recalls Chris Lowe at his best while lyrically they nudge us into an ecstasy of demystification redolent of the KLF. Fans of a tradition of sardonic indie-pop might find nourishment here, too.

Mavericks without a mainstream, their songs glitter with the promise of the lost futures encoded in 80s synth-pop.

Have a listen to our selection of Spray songs that follows.

But first, a chat with Spray's singer and joint lyricist Jenny McLaren. 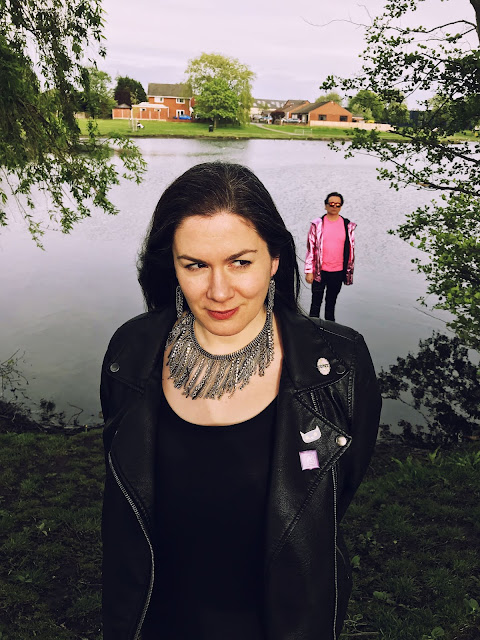 How are you keeping during lockdown?
Very well, thank you. I was furloughed from my day job and used the opportunity to try and do all those things you’ve never got the time for usually, sorting out cupboards and watching box sets.

Oh, and writing new music. Spray also filmed a few "live in the lockdown" videos which were fun to make and people seemed to enjoy.


What entertainment can you recommend to us for lockdown viewing, listening, reading?
I watched all seven seasons of Parks and Recreation and would highly recommend, though you can quite easily not bother watching the first season. It gets so much better from season two. I’ve been reading quite a few graphic novels over lockdown, and would recommend The Thrilling Adventures of Lovelace and Babbage by Sydney Padua. It is beautifully illustrated, has a wonderful sense of humour and you actually feel like you’re learning something too.

My favourite author is Christopher Brookmyre and so would urge anyone to try one of his too. I was supposed to go see Faith No More in June, and have been listening to them a lot, have a look for their most recent album Sol Invictus, it’s brilliant.

How did Spray come about?
When we were both in our early teens, John had a keyboard that he noodled around on and started recording the tunes he made up. Our mother heard some of these and thought they were good, but might benefit from some vocals and suggested to him that I had a nice voice. We plugged headphones in instead of a microphone in those early days.

John mentioned on Twitter that Spray have had a couple of approaches from major labels – could you tell us more about those, please?
While we were in the Cuban Boys, EMI were keen to release Living In Neon, but we left EMI to go to BMG and subsequently licensed the album to the legendary US electronic label Ninthwave instead.

Why did you abandon the album title Thrown Out of Film School? (We liked it a lot.)
We liked it too, but it was a line from a song that ended up not making the final cut for Failure Is Inevitable, so it didn’t feel as appropriate.

How do you decide your live set?
To start with it was just the songs that we thought most people would know, and as we’ve played more, we’ve tweaked that set list, replacing songs that maybe didn’t work as well with newer ones or interesting covers. Once Failure Is Inevitable came out, we chose a few we thought would work well live to include and they have quickly become favourites with the crowd.

We thoroughly enjoyed the Wimbledon gig, a slightly unusual venue, which suited us down to the ground. And the lighting was fabulous, so we got some great photos from it too - which we use at any given opportunity.

Which Spray song feels most personal to you?
Ooh, that’s a difficult one. I think from the more recent tracks I would have to say Get A Load Of This Guy, but there are many to choose from.

We're interested in your other musical projects, besides Spray and The Cuban Boys, and guest vocals on Helen Love. Do you have a discography of your one-off and other projects you've contributed to?
I don’t think there’s an official discography, but off the top of my head, I do a lot of vocals for Daz Sampson: The Woah Song and Teenage Life, to name but two. And I’ve contributed to The Barndance Boys and Ricki & Daz projects. You can hear me on Flying High by Filo Bedo and The One I Love by Relapse and I sang the theme tune to The Bloody Mary Show, A Being Being Loved.

I’m sure there are loads more, maybe I should get someone to update my Wikipedia page!

Do you play guitar on Spray songs?
I’m really not that good, I should practice more, but I believe it is my handiwork on a very old track called You Eat One Lousy Foot And You’re A Cannibal.

Would you ever want to make a rock album with Spray or anyone else?
I would love to do some rock, but I think my voice is better suited to pop. I think it’d have to be a different project than Spray, but never say never.

Would you describe yourself as a nostalgic person?
Even though I am in a band that is heavily influenced by the eighties, I would have to say no. I love old music and still listen to a lot of it, but I also really enjoy new music and the way we innovate and move forward with new techniques. I would never wish to be back in a particular time, I prefer to look forwards and enjoy what is to come.

What was your relationship with John when you were growing up?
Typical siblings I think, we didn’t really get on until we started making music together in our teens. And that turned out pretty well.

What's your favourite fashion item from the 80s?
The 80s were not kind to fashion, but if pushed I would maybe go for a batwing top.

Would you and John ever like to make Spray's equivalent of It Couldn't Happen Here?
Yes! We would love to do something like that. Back in the Cuban Boys days we made a short film called From Ennui to Blasphemy which I believe you can find on YouTube.

What's your experience of living in Liverpool?
Fabulous, it’s a fantastic city, lovely welcoming people and a great waterfront. I enjoy living by the water and there are some great restaurants and bars. I cannot wait for them to start re-opening.

What's your experience of going to clubs?
I‘m not a big clubber, I prefer drinks and food with friends for an evening out. Though I do love to dance.

Are you creative in non-musical ways?
I love Lego and have quite a few sets on display, though is it really creative if you're following instructions? I am a big fan of Sim and City building computer games, The Sims in particular and have a great time building and decorating their homes. Not sure if you’d class this as creative, but I do also really enjoy cooking, I make a lovely curry and do like to experiment with food.

What are you most looking forward to after lockdown? Do you have touring plans?
As previously mentioned, definitely a meal out with friends will be first on my list. But we will absolutely be getting back to gigging when we can. We already had a few plans for the end of the year prior to lockdown, but will just have to wait and see how that pans out.

Whose idea was it to include the word 'milquetoast' in You'll Never Be Forgiven?
That would probably be Ric, if there’s ever a word you need to look up or Google how to pronounce, that’ll be him.

You sing 'I wonder where the wonder goes', but please tell us some things that you think are wonderful.
Chocolate, wine and good friends. There’s definitely a theme here.

For a great interview we did with Ricardo Autobahn of Spray, head over to GodisintheTV zine.

As an introduction to Spray, we recommend this megamix sampler:


And here's one from the new EP, an anthem for our times, You'll Never Be Forgiven.

Posted by All Thrills No Frills at 07:50