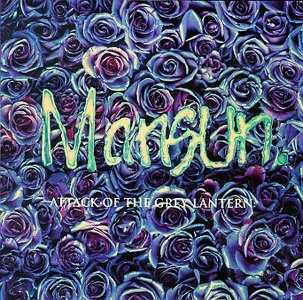 I never thought I'd hear these songs performed, hear of Mansun again. More than 20 years on, pink light glowed with appropriate celestial splendour to gesture in The Chad Who Loved Me, strings all swaying. Totally absorbed and in awe, I felt sheer gratitude. I was basking in younger years, taken aback, knew all the words.
The album I'd first heard from a library loan, the band I'd seen on the covers of the NME. Mansun represented, replicated a whole other world. Pen pal circles, adoring fanzines with ridiculous titles and frivolous expeditions, my first music festival, instant friendships in Freshers' Week, and all the blissing out to their music, words, revelling in characters and ridiculousness...

Mansun were one of the first bands I saw at a gig venue. They weren't like other bands, they toured relentlessly and favoured small places where fans greeted them with fervour. They came to my humble hometown Milton Keynes! Played in the local leisure centre. Summer holidays 1998 - that early July afternoon, I decided to dye my hair cobalt blue, wear it in two plaits. Second-hand army shirt, cord flares, purple Doctor Marten boots, maybe a baggy t-shirt, and off I strode with glee. I'd meet a pen pal or two there, get there a few hours early to enjoy the clamour for the band. A 45 minute walk later, and I was joining the circle of female fans who travelled up and down the country to see Mansun. Excitable stories about encounters with band members, here a fanzine tale about tinned soup, flyers for our latest fanzines exchanged, postal addresses noted and promises of letters so we could keep in touch (no internet in our family household till 1999). I remember days like that crystal clear and fond.

Mansun were this perfect embodiment of the kind of dreamy, zany, brilliant parallel world you could escape into as an aside to your sixth form studies. 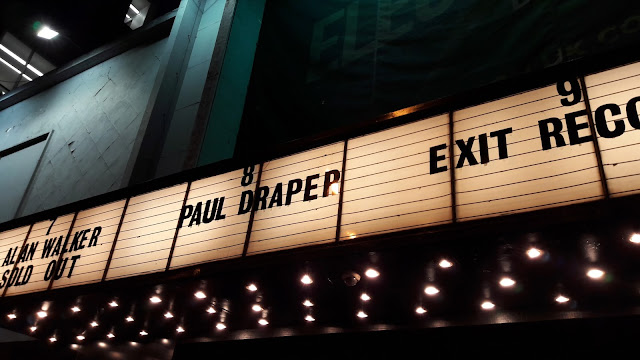 Back to the beautiful gig. It was simply special hearing Paul Draper's silken voice again. And some of the solo songs swirl about like the most elegantly melodic and shimmering of Mansun classics. We heard a hotch potch of chosen songs from Paul's recent career, rather than a straight-up rendition of his entire debut solo album. The collection of songs we'd waited years for, kept hearing about, then crept up and arrived of a sudden..

Opening with Don't Poke the Bear may have had an ulterior message due to some recent upset, but let's just think on the music and that night. It was a gem to hear Paul announce that he was about to play "a string of B-sides." A long lost, forgotten art. Mansun ruled supreme with B-sides, and it was the best of their art. Memories of Everyone Must Win blisteringly closing live sets chiming in my ears in distant memory... I took a lot of quiet moments to remember fond times, people I'd been afforded to meet purely because of the band.

I'd been giving the old album a spin in the kitchen in the last week and I was gearing up for Taxloss. Got to dance about for that one - climax of electronic wigging out. Remembering those: "We're a Taxloss" Mansun fanclub t-shirts - never did buy one but probably still have the postal order form in a box of momentoes somewhere!

All night, just kept thinking how special it felt to be hearing Pauls' voice and these songs again, as well as the new songs. It's hard not to think track by track and write on and on but every song was truly momentous. Had never heard You, Who Do You Hate? played live, it really kicked in.

More nostalgia and dancing beyond my years for Wide Open Space - total bliss. I'll use that word again and again.I was fourth or fifth row down the front, like the old days, good view and bit of room to manoeuvre, there was no way I wasn't moshing for old time's sake to Stripper Vicar with its killer chorus and lyrics. Less thought about the pulled muscles in my sides from doing so, as I type this now, the better. I was probably alone in pogoing and I still don't care. All this too-cool attitude, posing still... I was there to feel the years fall away and enjoy myself and it was the best feeling to just let go and not care like when I was in my teens and 20s. I wore heart on sleeve with my 1998-circa Mansun fan gear. I had drawn the line at wearing the old army shirt and added safety pins on the arm though... Mansun's image changes were legendary, it must be recalled and celebrated and I loved indulging in all that in my teens.

Disgusting was intriguing to hear live, and then it was into another mosh-a-thon with She Makes My Nose Bleed. Only thing missing was Steve Lamacq back-announcing it on the radio!

Naked Twister was swirly and squally as of yore. Then a massive sing-a-long to Egg Shaped Fred, with Paul joking about the lack of lyrics at the end... na-na-na-Na-na-Na-na-na....

Dark Mavis was epic and it was one of several moments on the night where the humour of Mansun shone through so much - and I realised how lost it must have been outside of the dedicated fanbase. The descriptions, the wryness, but in such straight-up delivery. The subtlety. I found a lot of hilarity in the lyrics of the album, as if understanding them all anew.

"You can kiss his vase until the end of the month" sung over and over was a high point.

I exited the fray, but I was keeping an ear out just in case. I mean, a band so famed for quirks and B-sides and so much oddity... The familiar piano riff kicked in and a great big sing-a-long ensued, music hall style... "The lyrics aren't supposed to mean that much, they're just a vehicle for a lovely voice..." All the arms aloft and silly delight, it was fantastic and the best end to the night. I finally got myself a long-sought-after roses t-shirt with Mansun logo, so beautiful.

Sir Draper said he'd see us all "next year" for a rendition of the album Six... I'm counting on it!
Posted by All Thrills No Frills at 16:45