My 5th Brix gig! She's a legend of The Fall. Backed with other revered former members such as Steve and Paul Hanley, the band just gets mightier and mightier.

I had a different song from Brix and the Extricated's first album in my head each day in the week leading up to this, and the week after. It's an outstanding collection of new songs, livid with grinding bass and alive with the powerfully confident vocals and surefire lyrics of Brix.

Old Fall songs are in the mix live - but just three make the album: LA, Feeling Numb and Hotel Bloedel. All of which, Brix co-wrote or wrote. Hotel Bloedel was actually the first song Brix wrote - before she even met Mark E Smith. It was the song he first heard that inspired him to call her a "Genius" and invite her to join the band - when she played him a tape of it in his car one night, after they met in a bar, post-Fall-gig. So any detractors who think The Fall is all about Mark E Smith and his ego can do a runner. Brix is a talented component of The Fall past, and a remarkable force right now, on stage and performing once again.

She'll draw you in with her hectic vocal delivery, all full of intent and infused with a smashing passion and defiance.

Something to Lose has a Fall clatter intro and bursts into a percussive, driving grind, Brix carefree and singing to us directly. Steve Hanley's bass playing is obviously an almighty part of the force of the band too. 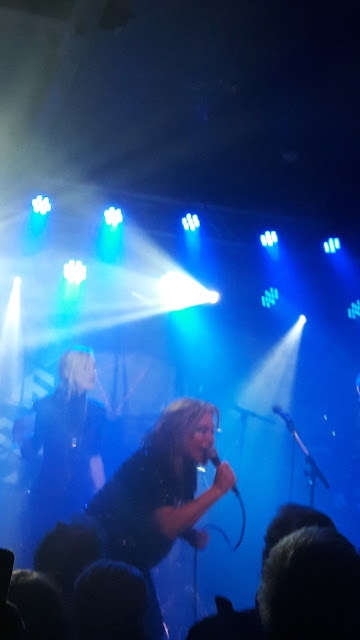 Damned for Eternity and Pneumatic Violet are catchy as hell. And Brix's persona as frontwoman doesn't need to convince anyone. She asserts her vocals half-rap style, strutting around the stage, here a punch to the air for emphasis, here a kick to emphasise her words.

I love her new t-shirt that suggests a double-meaning: LIVE.

Perhaps the best moment comes as Siobhan Fahey - one of her old pals in pop - joins the band on stage to duet with Brix. If a member of Bananarama singing Totally Wired kitted out in glitter is any Fall fan's idea of crossing a line - bring it on. Brix and Siobhan are having a ball, reeling off the lines normally ranted out by Mark E Smith. It feels like necessary defiance, rejection of the bullshit notion of only men being allowed to own guitar music and that it must be done SERIOUSLY!

But that's a fun gig climax, when everyone's clearly had a few. It's not to be forgotten that Brix is a songwriter to be taken seriously and in her own right. I celebrate every gig, every time she sings out and crushes all the times women were never afforded equal respect and the chance to take centre stage with guitars. Brix is brilliant, and bring on her rightful recognition in rock stardom.
Posted by All Thrills No Frills at 04:56