Lou Reed on page three of my local paper 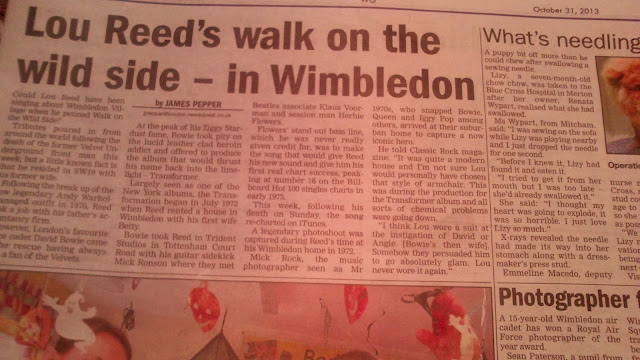 A local newspaper took it upon themselves to make Lou Reed a local story...

Could Lou Reed have been singing about Wimbledon when he penned Walk on the Wild Side?, the page three story asks in earnest.

He once resided in a house round Wimbledon village... It was quite a modern house.... But a spokesperson says that they're not sure if he would have chosen that style of armchair he once got photographed in at the house....

Details about the debut Lou album that Bowie produced - Transformer - and trips to the studio, Mick Rock as photographer....

Bowie is described as a 'space cadet' who 'took pity' on Lou Reed, the 'lucid leather clad heroin addict'.

Story ends with a quote saying Bowie chose a suit for Lou that he never wore again.

Wonderful local journalism; made me chuckle aloud to see him squeezed into local life, and I heartily approve!

I also approve of recent happenstance when I was in a cocktail bar recently for a celebration and it suddenly went from meaningless background 'chill-out' music (mixed absurdly with Santana?!) to... what became Lou Reed hour. It made us stay for more than the one cocktail we had planned, because the novelty of such a swanky, overtly commercial and mainstream place (which I normally wouldn't frequent !) could slip into this obtuse mode! - and I personally, honestly, could've ended up staying all night and ended up flat broke and not caring so long as I could hear the music right there, right then.

I conferred with a friend that Pale Blue Eyes was my favourite Velvet Underground song, and they agreed to my surprise. Reminisced about teenage moments, tired from my first job, drinking Hooch, passing out to the songs European Son... or Heroin. My beloved responded to this news by saying: 'Somewhere there is a junkie getting high to I Am A Cider Drinker'....!!!

I don't often turn to the VU's records anymore (though you'll read on here a blog from this summer where I recommended Coney Island Baby from Lou's solo canon as an evocative song, so as an artist he's never been out of mind. I was thinking to re-read the incredible Victor Bokris book about him as well, though I remember it vividly so long on from my teens) I guess VU/Reed songs are often in my head, I know them so well. So loads of old memories came flooding back, and it was just really fucking good. That velveteen voice.
Posted by All Thrills No Frills at 13:01