Iggy Pop festival at the ICA

An excellent evening of Iggy Pop celebration at the ICA recently. Firstly, a showing of a film of an early 1990s concert in Paris, followed up with discussion and input from its director, Tim Pope. 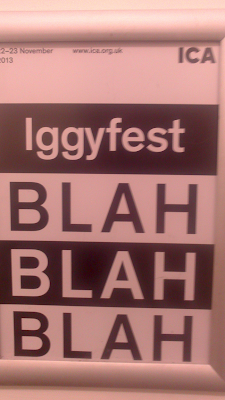 The rare prospect of witnessing Tim Pope in conversation was quite the draw for me, I must admit (I am that obsessed with The Cure. Also, I like Pope's Syd Barrett style song about a tree). I wouldn't go so far as to use the word 'fan' about Iggy Pop anymore, but I have liked Iggy Pop and the Stooges over a long time, plus it's always nice to hang out at the ICA.

During the film, as warned, there was full footage of old James Osterberg in the throes of things with quite a few moments of writhing and jumping about naked. I couldn't help but find amusement when Iggy had his pants and trousers down on his knees, whilst still managing to play guitar wildly... and as he was seemingly about to plonk the guitar down, a soundman came rushing over. It almost looked like he was going to pull up Iggy Pop's pants and trousers for him, rather than pick up the strewn guitar.

It kept occurring to me throughout the concert footage: does this man even know where he is? Funnily enough, this got discussed afterwards, and it turns out Iggy Pop not only had no idea where he was in the moment; but that he had absolutely no recollection of getting his bits out.

There's that incredible TV interview Iggy Pop did, a sample of which made it onto a Mogwai song. It came to mind when I was watching the live performance. How reverently he spoke about music being so powerful, and how when he is in the grips of it it's all beyond his control.

The film was blasted out almost at live concert levels of sound, and lots of audience members were whooping and clapping and dancing about. I wondered who else might inspire such a fervent display without their being present. 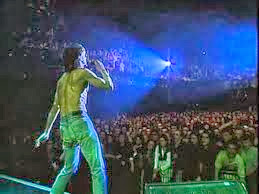 The film was called Kiss My Blood. There were quite a few bloody scrapes to Iggy Pop's skin throughout the concert. At one point he went down to the front row and sang: 'Don't you wanna kiss my blood?', which a female fan promptly did without hesitation, which I found a bit surprising and grim whichever rock demi-god it could possibly be - mindboggling how far some fans might go. It was amusing at one point to see Iggy rush down to the front row, inspire a bunch of people to sing and pump fists along to one song, and to note one girl at the front inches away from the man himself - looking utterly unfazed and bored !

As a treat after the live concert, we got bestowed a special video message from Osterberg himself. Tim Pope kept saying what a shy and charming man he is, which I hadn't heard about, to be honest. Though his wackiness in a second video we were sent over was unsurprising; involving Iggy Pop talking to himself via the medium of a walking stick with a face and moveable arms attached (known as 'Stiggy Pop' or something), and lots of silly voices. I can imagine he's one of those people who might lark about referring to himself grandly in the third person as he goes about what he does. I realised I have never read a biography by or about Iggy Pop, so I ought to fix that soon.

Tim Pope came across as really amusing and kindly. Lots of interesting anecdotes for us. I loved hearing about the first Iggy Pop show that Tim Pope went to in 1977, at the Rainbow in Finsbury Park, along with Robert Smith. During the Q and A, I was secretly hoping to try to fit in a cheeky question about if he and Robert Smith see much of each other these days, any recent stories, but there was only room for two questions from the gallery.

Tim Pope relayed to us the tale of the sequel to the film The Crow, which apparently involves Iggy Pop in a gutter with his nether regions on fire. Tim Pope directed the whole thing, and it was his personal job to joyfully commit to the lighting up as well!

Pope also led us through a bunch of photos from his personal collection, of he and Iggy Pop. The second photo in, he apologised - as it was a still of Rod Hull and Emu! It was a thoroughly entertaining and fascinating, fun night. Shame that the house was only about half full, as stuff like this ought to be a huge inspiration for getting people to the cinema. Thanks to all involved for a cracking night.

If you head to Tim Pope's website, there are a bunch of his films on there, if you're curious. The documentary about Tim Pope as a music video director, from last year, is up in its entirety to watch too. It's interesting, and if you're as obsessed as me about Cure minutae, it is well worth watching for the five or ten minute section on Cure videos he directed - as well as wonderful anecdotes about the band plus lovely interview time from Robert Smith.