The buoyant return of The Pop Guns was one of my favourite gigs in recent months. I was familiar with a couple of records and a flexi disc care of my boyfriend, who is a long time fan. Waiting for The Winter was the song I knew best: melancholy in sentiment yet soaringly bright, hopeful pop. I was looking forward to seeing the band who'd hit their stride in one of my cherished periods for indie (the start of the 90s). 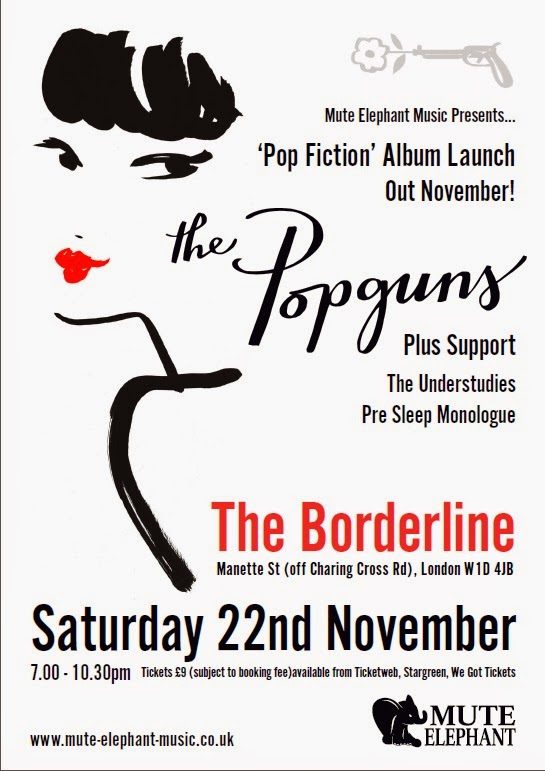 I was also thrilled to take the chance to get over to the Borderline off the Charing Cross Road in London - one of very few gig venues remaining in that once thriving area. We've just lost the 12 Bar Club on Denmark Street, and we were forced to say goodbye to the once dependable, pivotal Astoria and LA2, as well as the fantastic basement bar Metro (indie club extraordinaire + spotlight for new bands). The Borderline was a great choice for gathering the band's original fans, as well as new ones, in an atmosphere akin to a student union circa the 90s. Big 80s pop hits played as we waited, mixed in with new wave bands like The Go Gos, and the Buzzcocks.

As soon as Wendy Pickles and band stepped on stage, their sense of jubilance to be playing together for a crowd could be warmly felt. If memory serves, it was City Lights, the opener to their newest album that dazzled us first. Bold, strident, twinkling and tuneful, it felt like a well-worn favourite. Lovejunky had a similar effect, so immediately catchy, kinetic and smoothly sung. It's a song worthy of indie club playlisting and delighted dancing.

Wendy's singing was complemented with brilliant effect by Kate Mander - 60s girl band backing style, or lending strength with joint lead. This had resonance with me, as this sort of female-led, jaunty, jangy, guitar pop is all too rare in current times, and we need more. There simply hasn't arrived a new female indie singer who is equivalent to Wendy Pickles or, say, Amelia Fletcher, another longstanding indie great. At times, I found it hard not to be reminded of the great Amelia Fletcher. Wendy too has the knack of singing with a full, genuine smile, which only makes the Pop Guns' songs seem all the more gleeful, giddy, model pop, much like Amelia's many ace bands over the years, Tender Trap/Marine Research/Heavenly/Talulah Gosh.
Waiting for the Winter was received with appreciative ebullience by the audience. Pleasant heckles about 80s and 90s Pop Gun gig memories came along with other older songs.

I ought to add that the Pop Guns are not typically sensitive, gentle, jangly indie pop -there is a real sense of punk influence at work, which thrives when played live. Guitars are as threshing, thrashing as the Buzzcocks. At times, The Pop Guns are more akin to the heavier moments of The Wedding Present than anything from Sarah Records.

But, given there is also the reminiscence of Amelia Fletcher and jangly indie pop, it did come as a huge surprise to witness an encore that night of Wendy Morgan expertly rapping (!) A Tribe Called Quest's hot song, Can I Kick It....! She sang an unfaltering version of the 90s novelty hip hop song. It was the perfect bit of pre-Christmas fun. It turns out the band recorded it as a B-Side years ago.


I don't bother much with thinking about albums of the year type lists, but Pop Fiction by Pop Guns was a highlight of 2014. It lends memories of that perfect indie pop from the early 1990s, but also sounds very now, and is very essential, emotional, confident pop. The charcoal drawn album cover also gives smitten delight: 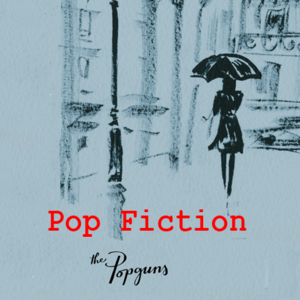 Posted by All Thrills No Frills at 03:17