Brass in Pocket was instantly put onto one of the first compilation tapes I made, as a teenager, in the 90s*, at a time when I was digging around for music from the past that fascinated me. It's strange that I never pursued the band beyond that one song, somehow, until recent years. First, acquiring the band's debut LP from someone who was happy to pass it on. Then, late last year, I was curious about seeing Chrissie Hynde live, when a date was announced in London. I have a friend who is a great fan, and the idea of seeing a strong voiced female performing really appealed. I don't have enough musical heroines, least of all whom are frontwomen. I instantly booked up, despite the hefty fee, as I was working my socks off and deserved some fun.

I bought Chrissie Hynde's solo album, Stockholm, amazed that this album was not only recently released, but was her first solo work. It's a marvellous album! Strong, deep, low female voices are the ones I love best, maybe because I more easily match that if singing along. The album lit up my world, felt strident, ace. So many good tunes, excellently produced, and with her brilliant voice and lyrics to the fore. It's odd that at the age of 34 I should be seeking strong female icons to admire**, but I revelled in finding Chrissie Hynde to be just this, last autumn. A couple more Pretenders albums on vinyl were bought up in secondhand record shops, and many instances of singalongs and euphoric dancing followed... until it was time for seeing Chrissie live.

I don't know all that much about Chrissie Hynde, personally. The music stands strong alone, for me, and that's also what counts. I've heard negative things said about her, derision, but I'll go with forming my own opinion based absolutely on her musical output.

It felt genuinely exciting to be heading over to the gig, and I rarely feel that old, pure, innocent feeling about gigs. My friend felt the same. We were instantly engrossed by the range of merchandise on sale at Koko, sweatshirts and fanzines. I bought the fanzine style programme right away, it was only £5 too, rare to find such things so affordable! Gazing at a T Shirt resplendent with a full length Chrissie Hynde rocking out with her guitar, I just thought how rare it is to see the image of women with guitars, on T Shirts, in culture, anywhere... 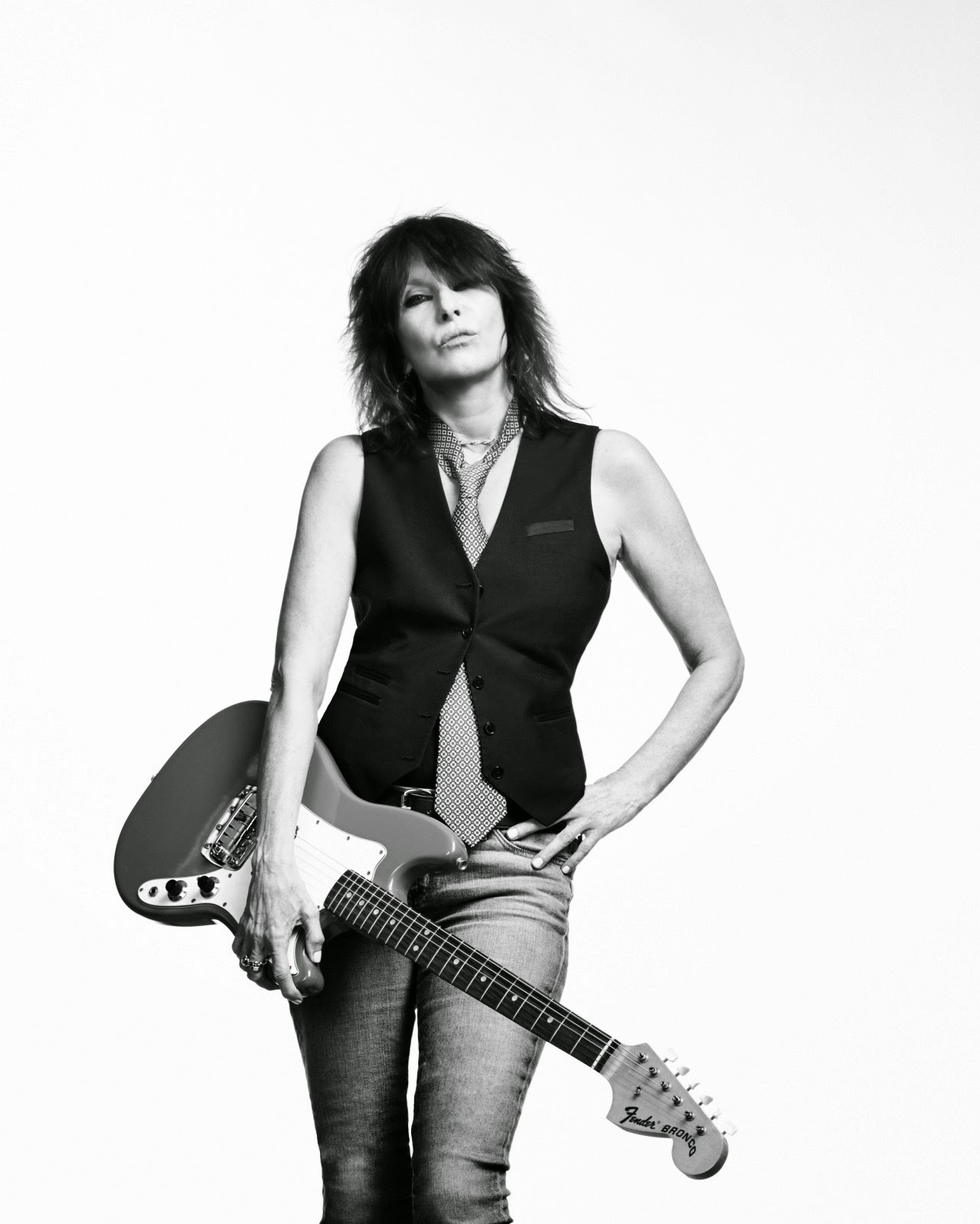 Seeing Chrissie Hynde centre stage, with guitar, blew me away, too. I cannot apologise for saying all this, because what I felt are revelations, and that's to be celebrated. I found myself dumbstruck and thinking: just when have I seen a female, right up in the centre of attention, playing rock music, leading a band, all eyes on her, screams of adulation from both women and men? People were just shouting her name. She replied with a playful 'f*** off', which was hilarious and humble. She had so much presence, and her voice was incredible. Her guitar sparkled gold and felt like an emblem to me and my friend. We both left the gig, saying how we wanted to pick up our dusty guitars and play music again.

Since this gig took place, in November, last year, my friend has bought a new guitar from Denmark Street, and I have been there to pick up new strings and music books. I like to think that we've both become more powerful, impassioned, inspired, driven!

It was a really emotional gig. I loved hearing all the songs from Stockholm. You Or No One is fabulously 60s shimmery girl-group pop. Like in the Movies is really cool. And, Dark Sunglasses has a great pop hit sound.

I wasn't expecting Pretenders Greatest Hits territory, but we were privileged to be gifted Don't Get Me Wrong, a pure groove-along. Then there was Back in The Chain Gang, which has really grown on me lately. We also got Precious (!), and a pre-Christmas present (alas without faux snow), in 2000 Miles.

The dance at the end that the band did 'for the grebo fans' was surreal, and felt like it showed humility towards the Pretenders' roots and a sense of fun for the original fans. I can't escape mentioning: that pout! Chrissie pouts away to perfection, as she ever did.

I'm looking forward to the wealth I have to read about and hear from Chrissie Hynde, in interviewee mode, and musically. And to dancing my vegan boots till their worn, again, some time...

Found a gig setlist for that night, here.

*The song was wedged in between Teenage Kicks by the Undertones, and Somewhere in my Heart by Aztec Camera... I took a little while to improve on the ways of mix tapes...
**Interesting to note that Chrissie Hynde was 34 years old when Don't Get Me Wrong was in the charts. Inspiring to know!
Posted by All Thrills No Frills at 13:17