Tilly and the Wall return !!

I've never felt the absence of a band quite as I have felt Tilly and the Wall's the last three years or so.

I've been craving new music or gigs from them ever since; have sadly missed the lively brightness they instantly instigate whenever they're around. No bands have taken their place in my heart. I emailed their label earlier this year, in fact, fearing that the band had split. I remembered that one of the band had become a mother in the last few years, and I wondered if it meant the band were no longer active. 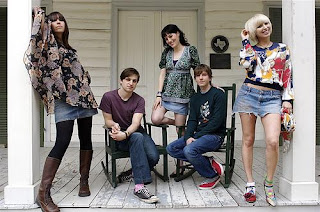 In the summer, I had a surprisingly hard task trying to find a record shop that stocked or could order in a copy of their debut album, Wild Like Children. It was the perfect birthday present for a friend, music to bolster the mood, with inspired female vocals, and incredible energy. A couple of record shops told me the album had been deleted. I since tracked it down (though after the friend's birthday, which is a shame), in a second hand record shop. The thought of this album being unavailable for ever more fills me with a certain amount of despair - my own copy is scratched to heck due to it being such a life-saver/life-enriching for many years. It will always make me smile and feel glad again. I don't exaggerate when I declare it one of my all-time favourite albums. From start to finish, I am in head over heels in love with this album.

If I hadn't have picked up a copy of Stool Pigeon magazine today from Flashback Records, I would probably remain oblivious for quite some time to the fact that, actually, the band have just last week released a new album, and two limited edition singles!

I'm so excited to hear this news, and I can't wait to get hold of a copy of the album!

I found this recent interview here.

They're currently touring the US, and I wonder if early next year they may make it over to Europe/the UK?! I will be all of a fever at such news. They're the only band that can get me dancing and feeling truly free, with abandon.

There are several tracks up and about the internet to sample, including the single Defenders, which is really growing on me, and has many typical Tilly trademarks, but with a new sound and mood to it as well. I love the children's backing vocals.

It's the first single from the new album, Heavy Moods. It carries on where they left off with experimenting with a more dance-based and electric guitar sound, with elements of hip hop.

Now I am sitting on the edge of my proverbial seat, awaiting Tilly and the Wall fever anew - a visit to the UK, tour dates, interviews, and plenty of smiling, clapping, tapping, and dancing.... I hope it's soon!

http://officialtillyandthewall.tumblr.com/
Posted by All Thrills No Frills at 09:47

Email ThisBlogThis!Share to TwitterShare to FacebookShare to Pinterest
Labels: tilly and the wall