Photos taken from the middle gig of Allo Darlin's three farewell gigs, before the band is over: 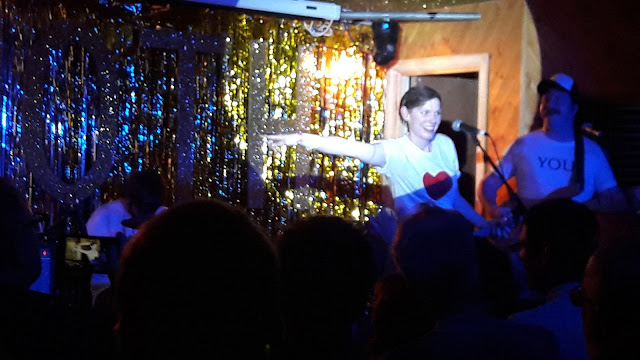 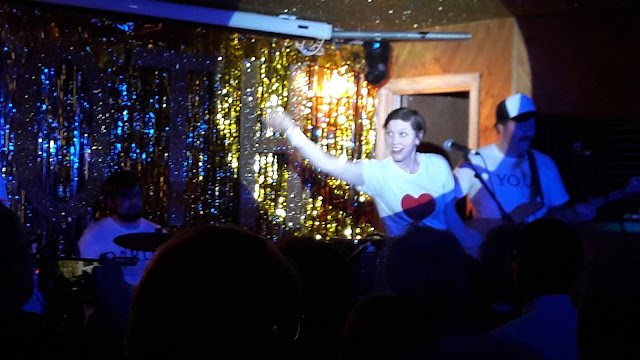 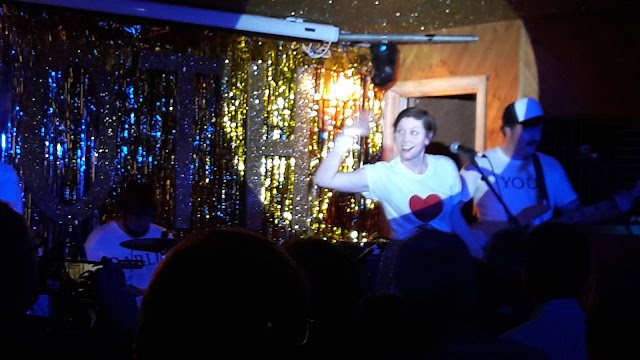 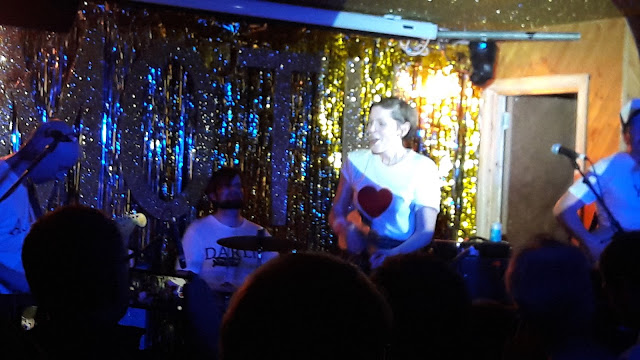 There was a great sense of emotion from the offset - as I entered the bar, second song in, late from being lost in the rain, the band's set was being piped through speakers in the former ex-servicemen's members club bar, and I heard Elizabeth Morris's voice crack.

The set was a really nice mixture from Allo Darlin's history. It was lovely to see the band having a lot of fun on stage, smiling and laughing, joking with each other. At one point, Elizabeth ensured that guitarist Bill's Stephin Merritt-style solo singing was supported with a huge, warm round of applause and cheers. The band recounted memories from their tour bus travels, and thanked their parents for their journeys from the Antipodes to be part of the festivities.

The Moth Club is a fantastic venue, with its gold, shimmering stage backdrop, glittering ceiling, and cosy old bar. The place was packed to burst, and I was stuck by the door, the person everyone had to squeeze past. I grinned and bore it, just one of those things and most folk were polite about it. Gradually, I found myself moving further in bit by bit as more and more people traversed to bar or conveniences. A third of the way into the gig, I found a space to settle and relax in, able to dance and sing a bit and feel immersed in so many of fond, old songs I've known and loved for a few years.

It was 2012 when I first saw the band live - Easter weekend sunshine casting light on Elizabeth in giant sunglasses, singing in front of Rough Trade record shop near the Portobello market, celebrating Record Store Day. I felt like I'd found the meaningful, melodic and personable indie band that had been absent in my life since Tilly and The Wall stopped touring the UK about five years before. My friend bought the album Europe on the spot, after the soaring set.

Allo Darlin became a band I treasured, and whom I could rely on to tour regularly. I saw them throughout the years, most memorably in the back room of Herne Hill's Half Moon pub, which felt like indie gigs of the 90s, captured that spirit. I created the print version of this blog, sold it in fanzine format on the night of the gig. I was inspired to create the fanzine, amidst the rush of the band's songs carrying me away around the year 2012.

Another memorable Allo Darlin gig was at the student bar at Kings College, when it felt like the band were on the brink of fantastic, big things. I spotted a longtime NME journalist at the gig and was sure the band ought to make a front cover - but the corporately curmudgeonly lot only gave the band an enthused live review. The band went on to play bigger things, including at The Scala.

Last night at the Moth Club, I was having a really nice time, feeling it was a cheerful farewell to a beloved band.

But as I raised both arms to photograph the band (as above) in high spirits, wanting to capture the fun, a complete stranger suddenly came from behind me, placed both their hands firmly on both my hips, lewdly whispering 'ooh, hello, how are you?' in my ear, as they brushed too much and too long past me to get out the door. It was done in such a casual, overly "friendly" manner that anyone who'd seen it probably assumed it was someone I knew well/my boyfriend. And that's what left me shocked, feeling sickened, and stuck to the spot. No stranger has the right to get that close. This is my body. I turned around to show my dismay and fear as the man went past. I turned around again, to see if anyone had witnessed what had happened, to see if they shared my dismay, would ask if I was all right. No one acted whatsoever. I was alone. That shocked me further, upset me more.

I thought about trying to continue enjoying the gig, not let things be ruined. But it was impossible. I spent a few confused, sad minutes with the gig just washing over me, unable to identify any songs anymore. Despite me hating it happening, the tears started pouring, angrily. I had to leave.

It only occurred to me then, in the horrible confusion of things, to seek help from staff. I had seen friendly security about but they had been no where in sight at that point. I went to the bar and spoke to staff. They immediately radio-ed to security who turned up in seconds. They were professional and fast acting, listening to me, acting on the incident. But I had no chance of finding the culprit by this point. Security were friendly but firm about the incident, saying to contact them if I saw the culprit or if anything were to happen of the sort again.

I went back into the gig, tried to enjoy the end. By now things were joyous, the band linking arms, bowing, smiling: you could read each, individual tee-shirt spelling out: ALLO DARLIN LOVE YOU. There was a big singalong with ukulele.

But I just had to rush out of the building and get away, get home. Tears and upset. The incident had ruined the gig for me. I didn't even get to buy the band's farewell single as intended.

But I wanted to post my photos, and write the good things I enjoyed from the night. It's just a sad fact that some people have no idea that they have no right to cross the boundaries of complete strangers, to make people feel like an object, humiliated and vulnerable. That's not what gigs are about. And it certainly has nothing at all to do with the brilliant band Allo Darlin who spent many years making shining bright indie pop that lit up lots of lives.

ADDENDUM: Can anyone tell me if Elizabeth Morris will continue singing? She was a fantastic part of Tender Trap as well as Allo Darlin, and has one of my favourite ever female singing voices. I would miss her voice heaps.
Posted by All Thrills No Frills at 14:02