Libraries do incredible things. Who would expect to be treated to a live reggae MC, after hours, in the reference library? And all for free.

Asher Senator is a man who influenced generations of musicians in reggae, hip-hop, R'n'B. I know he's a big deal, because when I met up with my brother - a DJ and hip-hop and dub fan who's been through the 80s and 90s - his smile said it all when I handed him a signed book! - 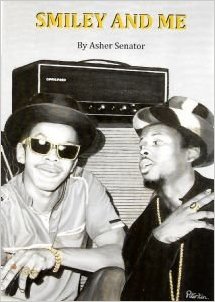 Asher's vibrant energy, wit, and warm personality brought the house down. A great sound system backed him as he performed old favourites.

Live performances were interspersed with fantastic old tales from his years working with Smiley Culture. Whilst Smiley Culture is sadly no longer with us, the friendship was relived via all the anecdotes of friendship in youth, starting up in music, and jetsetting. As Asher pointed out, if you were a new MC in 2016, you'd just turn up to the club with your USB stick with your backing track, plug in and go. Back then, Asher and Smiley had to build their own sound systems from scratch, lug their gear around in dodgy old bangers, and got into scrapes.

My favourite story was hearing about the duo's acquaintance with a man who owned a field of the green stuff. Cue a song featuring the lyric: 'Me no wake for 24 hour' !

These days, Asher runs a charity for kids getting into multimedia arts, and it sounds like he's doing a noble job, inspiring future generations, anew.

Asher is a joyous bloke, and it all came through with the songs, readings, and stories. Listen to the songs, buy the book!
Posted by All Thrills No Frills at 10:13