Brix And The Extricated, Live at The Lexington, London, 4 November, 2016 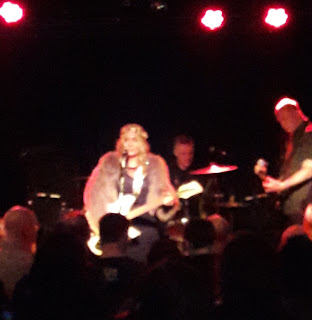 Tonight at The Lexington, Brix's entrance was dramatic, she sparkled from head to foot in shining headdress, glittering eye make up, twinkling gold guitar strap, and (hopefully faux !) fur coat. I have to admit to feeling emotional, even tearful - I think it was feeling overwhelmed and glad to be bestowed a female heroine, centre stage, at last. Decades of gig-going, but back in my teens and the most part of my 20s, what I would have given to have a rock goddess of a frontwoman/role model...! Chrissie Hynde has had a similarly powerful effect, in my 30s, and [I wrote about that here]

The songs and Brix's singing are so powerful. The strength of her voice, so commanding. There were only two moments where Brix lent a slower, quieter quality to her voice (as heard in The Adult Net). Primarily, Brix is unafraid to be loud and insistent, and to sing in a talking punk or rap style, and deliver everything with intent, dead serious. At one point, in a new song, she was pointing, and reaching out to the audience from lowdown, in-your-face, in a 70s punk style: confrontational, or just wanting to demand a direct communication with the audience, on our level.

With Steve Hanley's expert bass, we've obviously got another legend of The Fall. The full band sound is huge and rhythmically spectacular. Hearing songs like 2 X 4 - that rockabilly influence was one of the key things to draw me to The Fall. I'd play along, in my bedroom, with newly bought electric guitar, frantically, inspired. Now I'm dancing along, propelled in awe.

Big New Prinz is the pinnacle of the night, once again. But this time it is epic. We're led in with a slow, swirling intro, wondering what's coming next - Brix whispers the words, and we're taken aback when the song suddenly explodes into action. Winding and grinding on, hypnotic trance effect successful, the song then plays out to its end with every band member leaving one by one. First, it's Brix, and I have to smile that it's her walking out of a song a bit early and not Mark in his trademark nonchalant style. Then the instrumental chords and rhythms dwell magically, before guitar is gone... leaving only that monumental bass with drums. I think we could listen to that legendary sound all night, but soon it slows to an end, and we're left transfixed.

Watching Brix perform, again and again, as I have done, I come away feeling blessed by her confidence, self-assurance. She may be singing songs she wrote in her time in The Fall where Mark E Smith tyrannically ran the show, but now she's the frontperson, she's centre-stage. She's the star.

Posted by All Thrills No Frills at 05:49