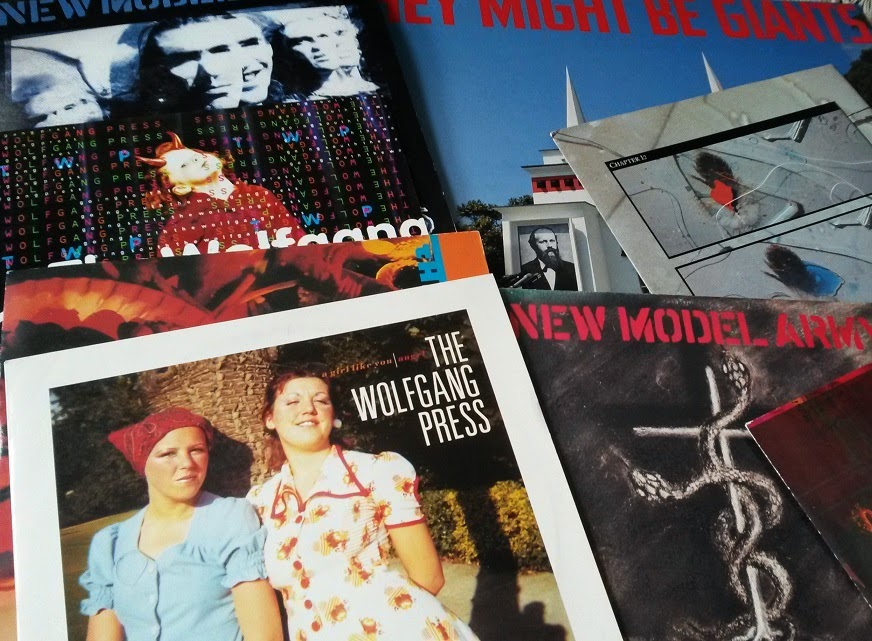 For shame, I have not paid a visit to good old Keith's record emporium in Kingston, Surrey, this year. I was lucky to catch the shop before it closed the other day, and Keith kindly stayed open a bit longer so I could browse. He is one of the most knowledgeable of music shop owners, being able to answer my random questions off the top of his head, and add anything of interest or make recommendations along with stirling answers. He's keen to refer to his various books of charts for accuracy, and I love that instinct. Plus, he always has the latest Music Week on the counter, which all together creates the atmosphere of a traditional record shop, and I really appreciate all that.

We chatted about 4AD Records and how scarce the 80s and 90s stuff is on the secondhand market. He was able to supply me with a batch of 7 inch singles from the likes of Wolfgang Press, Modern English, and Colourbox, and I decided to buy them all up. I'm already set on Modern English, and there's a Colourbox fan in our midst, so it was just a punt on the Wolfgang Press stuff, a name I was familiar with years ago (oddly convinced they were goth, but they're offbeat dancey). Really pleased with Modern English, and it was a curio to give the other singles a spin if nothing else.

I have to explain how New Model Army records came to be in my swag. I never thought the band were for me, too bleak and industrial sounding maybe. But recently I was reading about the history of Archway Towers, and there was an interview with Joolz from New Model Army, and the band wrote a gloomy ode to the tower in the 80s, which I listened to and liked. So I bought a few singles on vinyl out of intrigue, and now I might be getting to like the band... I see they're touring soon, which would be interesting.

Not pictured above, but also a purchase from Collectors Records, Kingston, was the first Exploited album on vinyl ‐ A birthday present for a friend ! I'm sure they will love the PUNKS NOT DEAD spraypainted cover alone...

Lastly, I got an album by They Might Be Giants. This band are a bit too wackily quirky for me at times, but a few songs are really innovative and fun. I bought the album for my feller, and it's been appreciated. My favourite here is They'll Need a Crane, which I have on VHS on an indie compilation somewhere:

Posted by All Thrills No Frills at 01:08