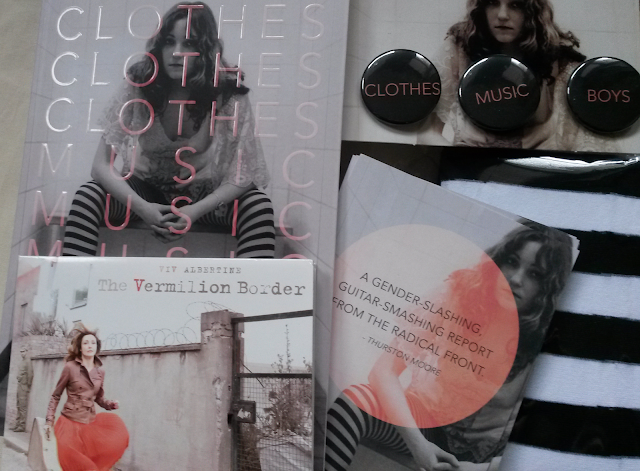 Thanks to Faber Social for putting on a good show at the Lexington last night. It was the launch of Viv Albertine's new rock autobiography, Clothes Clothes Clothes, Music Music Music, Boys Boys Boys. You could order a gig ticket + the book beforehand, then collect your copy of the book at the venue on the night, which I thought was fun. Free badges and postcards to pack into your free tote bag too - and I also came away with a pair of Viv-style stripy tights, which was a nice touch.

I expected to see an absurd vision in a darkened gig room of squinting old punks, poring over pages of her lively verse, as we awaited Viv's arrival on stage.

I'm sad to report that Viv had to leave the venue, an hour before stage-time, due to some sad personal news, and understandably having to head off. It was an emotional thing to be party to. John Robb, who made an announcement, worked hard to keep the night one of celebrating Viv. Old friends, boyfriends and rock colleagues gathered on stage to give fans an insight into Viv.

Tessa Pollitt (bandmate, who'd done some stonking dub/reggae DJing through the evening), producer Dennis Bovell, an old school friend, and Viv's first boyfriend (!) all stepped up on stage to reveal fond and funny stories and anecdotes. I'm hazy now, and regret not jotting down notes afterwards - maybe I'll add anything that comes back. But I remember there was also a lot of stuff about The Slits, some of which even our compere, the punk expert/musician/music journalist John Robb seemed to be hearing for the first time. My personal favourite was hearing how the band had secretly 'borrowed' a mixing deck from Yes when they were on tour away from the studio, and Ari Up got a pen knife and etched ARI WOZ HERE onto the pristine mohogany wood! Insight from their producer, the dub legend Dennis Bovell was really valuable too - how excellent the band were as musicians despite what anyone wants to say about them nowadays; how long-established musicians struggled to learn to play their bass parts, and how unique Viv's guitar playing style was. It was also good to hear it be emphasised that the Slits were a punk band - not post-punk, as they get mis-labelled - they were there all along, young and in the thick of it all with the key bands involved.

I can't begin to imagine how tough things are for Viv right now. But I wanted to write up this blog as planned, to say what a good night Faber Social put on in difficult circumstances, and now also to say how sad I am to hear Viv's news. I hope she gets to take the time she needs, and all her fans will - I'm sure - totally understand her need for perhaps not going on with any promotional activities or anything right now. But here is to the book's success, as Viv is a lively, vocal, much-needed inspiration, and in Viv's word's rock biographies tend only to be written 'by twats', and generally only by men too.
Posted by All Thrills No Frills at 09:54