Any die-hard Clash fan's attentions were guaranteed to be piqued by the announcement of a new exhibition. 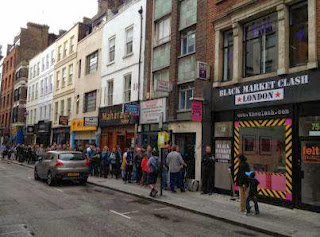 A couple of years ago Mick Jones's Rock and Roll Public Library was well worth a viewing, containing lots of his personal memorabilia, recreating his living room (how could I forget, someone picking up a knackered VHS tape of The Simpsons with its £1.99 charity shop sticker on it - thinking it for sale, and getting told off - it belonged to Mick's collection!). That reminds me, I still haven't visited the Joe Strummer subway.

Now it's 2013, and I got giddy at the prospect of rare memorabilia and music tracks on show.

But for 2013, the approach - whilst it did include the above - was more corporate. Free entry to the viewing, great, but the first thing you spy on entrance is a brand new Clash boxset - is that a £99 price tag? Posters and t-shirts and mugs and tote bags, ranging from £10 - 20. Everything's for sale. The band have a right to make money out of their b(r)and, and I don't begrudge them it, they are a band who worked gruellingly hard, lost a lot of money to getting ripped off by the music industry... And, though not that surprising, it just felt a bit cold and disappointing to me. On top of that, the whole shebang seemed to be an excuse to for Fender guitars to peddle (pedal) their wares - a live guitarist playing away, shiny brand new guitars on show. I would have happily paid for a basic commemorative programme, though, that would've been useful and nice, and all right in lieu of entry fee.

I say, go home, and be in the true spirit of The Clash, and make your own. Spray paint is less than £2, so blitz a bag or a shirt yourself, with your own slogan. Or, donate to the Strummerville charity, so future young bands can benefit. 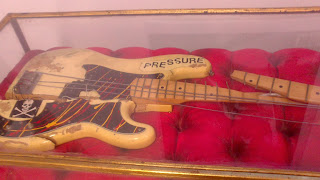 The exhibition itself was compact but for any fan, quite moving. Being in the same room as Paul Simonon's smashed, broken bass guitar (resting on red velveteen cushion!), as well as all those old, worn out guitars of Joe Strummer's, was an amazing opportunity and a little bit holy. 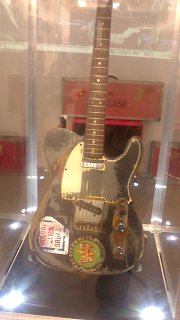 Seeing all those (holey) homemade shirts, hand-printed lyrics, rare photos, homemade tapes, and many books and records that inspired the band, was also wonderful. I loved seeing a spot of bright yellow here, a turquoise shirt there, and pinpointing performances from videos seen. Loads of trinkets crammed in too, like Paul's rings, old belts, scarves, badges, even a flicknife... 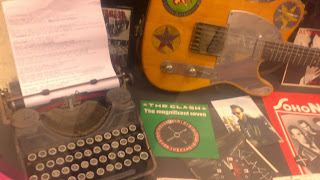 It was very small, and would've benefitted from being  a lot more spread out. I would have loved to have seen many more images, too. Surely there are hundreds of unseen/'reject' Pennie Smith shots, for starters. A whole exhibition could be made purely from such images. I really wanted to see much more.

Literally everyone was taking photographs (Don't Just Take a Photograph). I wasn't without guilt. I'd bought a disposable camera for this and Open House weekend. What Clash fan wouldn't want to be able to have to-keep images of their heroes' legendary guitars and such, anyway, be honest. I thought it was nice also to be able to email some digital photos to a Clash fan abroad who wouldn't get the chance to be in the same room as those guitars, too.

I worry how The Clash are received to the latest young generation - when everything's so consciously cultivated now, and music is more of a (quick, instant fix) commodity and has become ubiquitous, disposable, meaningless, more than ever. Of course, The Clash were cultivated (and they became a commodity as much as the rest), but it wasn't
contrived; and it was raw, it was new. I maintain that there's still a lot to The Clash that gets ignored in favour of the obvious punk and sloganeering (they covered so many more musical styles than punk, for one thing). And I doubt a band with as much passion and politics and heart could exist with so much heart-on-sleeve and unabashed sincerity, ever again, Fender sponsorship or not.

Oh yeah, one last thing: where was Cut The Crap? No acknowledgement whatsoever of this album (not even a poster on show or CD on sale). I don't need a barrage of reasons 'why it's so bad' (Pah, there are some fine songs on it, I reckon), the line-up change, the songwriting credits, etc etc - but it's still part of the Clash history.

http://www.berwickstreetlondon.co.uk/news?articleid=38
Posted by All Thrills No Frills at 02:28