In true indie-pop teenager style, the holes of a kids' audio story tape were sellotaped over to enable recording, and the tracklisting is stamped with pink Barbie images and red hearts. Lost touch with this pen pal way back, but I sometimes get to wondering if the people from those pen pal days still listen to indie, and if music is still quite as important to them as it was then. I'm still in touch with the odd few, but those that are just out there somewhere, that I haven't had contact with in years, I wouldn't know and get curious when I find old pieces from the past.

I'd forgotten all about that Snug song. And I couldn't place the song that turned out to be by Ballroom, but oddly could sing along a bit after all these years. I think I owe it to this pen pal for encouraging my love of Uresei Yatsura. Another sadly missed/overlooked little 90s band. I had never heard Millie before this, and I still remember my reaction to how much she stood out like a sore thumb on the tape! Grew to love that song, though. It's a wonderful, playful mix up of stuff on this tape - Abba, Nirvana, reggae singer Millie, Radiohead, Angelica, Sebadoh... summed up her tastes well. This was before the internet, and this pen pal was a bit younger than me, so for a 16 year old, a pretty amazing compilation/tastes. I love the mix between CD sound and the scuffle of vinyl stopping and starting too. Internet/digital, you just can't provide that! The tape still plays perfectly well - 15 years on.

Here is a ropy photo of the tracklasting - handwritten in biro: 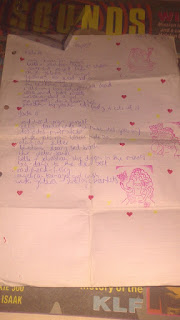 And here's the exact tracklisting, for reference:
Side A:
1. Snug: think i'm square
2. Belle and Sebastian: dog on wheels
3. Pavement: passat dream (actually, the song on the tape is 'Starlings in the Slipstream', if you're curious for precision!)
4. Yuresei Yatsura: no no girl
5. Ballroom: her sweet saliva
6. Blue: villa rosie
7. The Bluetones: heard that you were dead
8. Millie: my boy lollipop
9. Ultrasound: kurt russell
10. Nirvana: about a girl
11. The Pastels: don't worry baby
12. Sebadoh: temptation tide (cuts off)
Side B:
1. Radiohead: prove yourself
2. Abba: dance (while the music still goes on)
3. Delgados: M-emulator
4. Uresei Yatsura: black holes
5. Elastica: stutter
6. Bluetones: sleazy bed track
7. Blur: peter panic
8. Belle and Sebastian: Dylan in the movies
9. Bis: dance to the disco beat
10. Radiohead: lucky
11. Angelica: teenage girl crush
12. Uresei Yatsura: strategic hamlets
Would anyone else save their boxes of old mix tapes in a house fire? Mine are all in different places and in quite a jumble, but no less the precious.
Posted by All Thrills No Frills at 10:57