December's issue was slightly delayed as my local library has printing problems!

But here it is, ready to be photocopied up. Gig reviews therein include Seamonsters recently performed by The Wedding Present (in fact, a David Gedge interview will follow in issue #2 of the main fanzine, which is still coming along, I promise!). 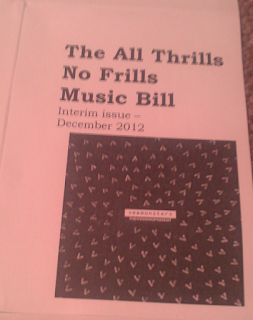 I have also included a little tribute to two musicians who inspire me constantly and greatly: Wiz from Mega City Four, and Joe Strummer from the Clash - both of whom passed on in the month of December -in 2006, and 2002, respectively. 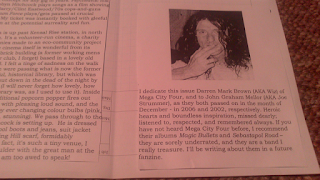 I'm having a Mega City Four vinyl singles session as I make fanzines and type this evening. I seem to realise more and more just how preciously honest and heartfelt Wiz's lyrics are, and that it's a rare talent to be able to compose such unadorned lyrics yet be so frank and direct and moving and true. I am working on an article about Mega City Four for issue #2 of The All Thrills No Frills Music Bill. In tribute to Joe Strummer, I have similar writing plans, and will soon get together with a friend for a day of positive action too.
Please email if interested in the new 'zine, though I shall be distributing this particular free mini issue round and about, after tomorrow....
Posted by All Thrills No Frills at 10:03