The early albums of Gorky's Zygotic Mynci, and teenage summers past 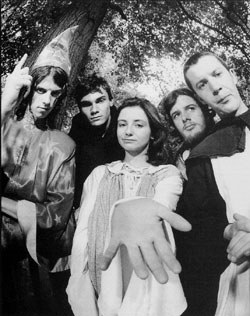 I can't imagine a band as weird (and young) and experimental and exotic sounding as Gorky's Zygotic Mynci existing now. This band caught me off guard, in the mid 1990s, aged 15, enough to rabidly scrawl the band's name on the back of my homework book: spelled GORKY'S ZYGOTIC MONKEY, of course.

From haunting, childish ballads about picnic hampers, to unabashed, anthemic Welsh language jollity, to what sounded like acid trips in the woods, this band soundtracked my transition from GCSE revision to starting sixth form, and they were incredible.

I only tracked down the band's Lucy's Hamper EP in the last five years or so, as hopes of a provincial, commercial music shop selling it at the time were vaingloriously shallow... Getting hold of the band's Ankst Records releases at the time was a real coup, being where I was. I was yet to approve of my parents' record collections, so all this 70s style acid soaked folk mixed with xylophones, recorders, synths, and whatever else Gorky's felt like dabbling with literally blew my mind. Growing up when I did, I can't help but think that teens these days might not be quite so fazed (and dazed) in the here and now, what with all the accessible past. And yet, as I say, I can't imagine anyone dabbling like this, creating anything as imaginative as this. Times are so desperately drab. John Peel is surely running around kicking things over in disgust as he looks down...

The simplicity and stripped back experimentalism of Gorky's Zygotic Mynci's early album, Tatay, has the sound of a bunch of young pals delighting in home recording. They've learnt their instruments, but the elements of fun and exuberance are so clear. The colours, the textures created are alive and wild.

Tatay, followed by Bwyd Time, were albums full of ludicrous songs. The band dressed as wizards in a forest on one CD sleeve served to stoke the sense of psychedelic. Cartoons of mystical elves and recruits from Puff the Magic Dragon adorned sleeves too, and I drank it all in soberly but wide eyed and keen, in disbelief.

The intro to the album Bwyd Time, of the same name, probably serves as a perfectly bizarre starting point:
As I listen to the album again, two songs in particular stand out still, and are still evocative of a wonderful summer of 18 years ago:
Miss Trudy, a wacky, dramatic, funny song about violin lessons and smashed up violins that's also a tribute in pretty ballad form.
Oraphis Yn Delphie is a fantastic instrumental song that follows Miss Trudy on the album. It's a swirling haze of brass and playful, sweet humming, simply like nothing else. Certainly not like Menswear or Supergrass!!!

After those albums came the single Patio Song, which was one of the most brilliant, vivid, lilting, alluringly tuneful singles a young teenager could hear. Totally at odds with all the brash 'Britpop' that had come before. Casually breaking into the Welsh language was a natural part of the song, and I only sang along to it more fiercely, even if I hadn't a clue what was being sung. There was no internet about then, so I can be forgiven for just going along with things, open minded, unable to decipher. Whatever it was, it was fucking amazing! Jools Holland saying of the Welsh language singing: 'That in itself deserves a round of applause, ladies and gentlemen', must have sounded like so much insulting bullshit to the band as they appeared on his show. Though it did feel revolutionary to English speakers, and exciting to me as a teenager, it was the band's mother tongue and it was more about our attitudes and our acceptance than offering a patronising 'Well done'!

Diamond Dew as a single was equally heartstopping, then I bought Young Girls and Happy Endings with its super pop catchiness, which was on the radio often. I helped both get into the top 50 of the charts.

The band delighted me so much, they were honestly a hugely pivotal part of why I chose to go and study at a university in Wales for a time.

I can't boast to have learned Welsh, but I do still carry massive amounts of fondness for Gorky's, and they remain truly creatively great.
Posted by All Thrills No Frills at 15:12