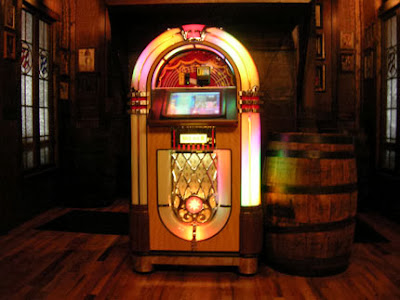 I get inordinately excited when I discover a jukebox in a pub. It becomes central to everything, and every song that gets played is cinematic, all-conquering in the room.

I have never come across a Mega City Four song on a jukebox before, so the other week at an east end pub, I was a very glad person, to the point of dancing !

Sometimes if a run of songs is really good, or there are fun memories attached, I'll be sure to remember the run of songs played. In the summer, recently, I played pool with my dad, which I don't think I've done before, and it was a really nice family moment. The songs really nicely soundtracked things - lots of stuff from when I was a teenager, like 90s europop.

It can get quite dangerous, as I put pound after pound in the machine - suddenly able to avail myself of all the money in the world. It can also get quite serious - though usually I will be welcome others' choices, out of interest and curiosity. I've never heard a run of three Genesis songs before, but that was odd to witness recently.

One of my favourite jukebox pubs was the Hope n Anchor in Islington. But it's a (s)wanky food pub now - ruined! The jukebox is still there, but a swanky electronic one rather than the old CD-drop that you could view through clear glass, which - though not as dramatic and poetic as the old record ones must have been - were just really momentous and heartening to behold. I do like that with electronic jukeboxes you can access an increased range of stuff, though there is something to be said for the more carefully chosen set of albums on display. Saying that, having the different genres or other themes to click on and generate a menu of songs to choose from, is pretty handy if you are drunk and forgetful/not sure what to put on.

This blog wasn't really going anywhere significant, but I like thinking/writing about jukeboxes. They're dying out a bit in places - they need to be kept alive!

- The Dublin Castle (has everything general indie/punk/rock you'd want, really)
- The Good Mixer (indie fare)
- The Boogaloo, Highgate (has the whole of Unknown Pleasures, plus The Clash, the Ruts, various other punk and rock)
- The Lexington, Islington (very indie cool and quite 'up to date'. My favourites include: The Dum Dum Girls, Vivien Girls, Best Coast).
- The Half Moon in Putney before they ripped the jukebiox out - this has made the pub lose its heart, and I can't go in there anymore, it's just no fun without it. Memories of The Cure, The Jam, it was like being in a student union bar again - the pool table has also been ripped out and now it's a middle class dining room with a suit of armour in it (dire!).
- Various dodgy pubs in Northampton, including one that involved Pato Banton and Big Mountain songs.

There must be more. I shall come back to this.
Posted by All Thrills No Frills at 11:33