A trip to the Borderline, a venue off Oxford Street that, mercifully, didn't succumb to Crossrail's clutches - the last significant rock venue left round that area, save the 12 Bar Club. On entering, realise we're 'fashionably late' as we hear ladies exclaiming: 'Why, thank you, Sir John Moore!' at the guestlist - as the dapper, suited man strolls coolly into the venue with them (and he does forever cut cool).
A couple of minutes to get a good spot near the front, and then Luke Haines is up, painted rock n roll animal versions of Nick Lowe, Gene Vincent, and Jimmy Pursey lit up behind him.
The set is entirely Haines on acoustic guitar - with added beats of a small hand drum, the odd keyboard moment (jokes about how he can't fucking play everything at once, if I recall). The set is primarily from the new Rock n Roll Animals LP - which would be a brighter performance had comedienne Julia Davis joined in on her spoken-word bit, surely? She is in the venue, hanging with fellow comedians, and I feel let down that she isn't adding to the performance, instead watching as we are.
Haines in his ROCK/ROLL shades: 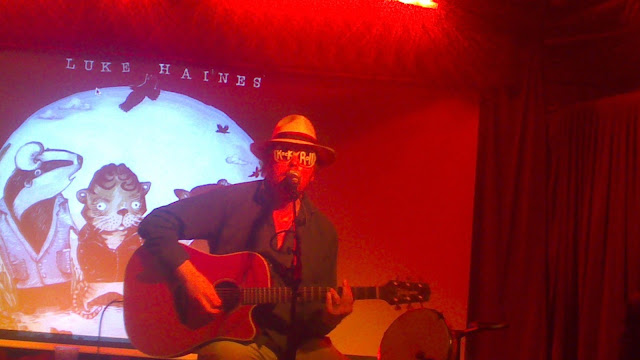 There's a powerful moment when Haines reads from a Mick Farren book (rock journalist and musician Mick Farren having recently passed on, and Haines being saddened by his death). Tell of poor Gene Vincent and his ailing leg, followed by his painful death by stomach ulcer. Crowd are laughing, I suppose at the uncomfortable, and also amidst the long, slow, deep, laconic vocal delivery of Haines, and how Haines speaking is somehow comedic whatever he utters tonight. But it's really sad, and I never fully knew all this (sweet Gene Vincent died - aged 36) , and Haines reads with such wonderful, wry, horse, commandeering panache... 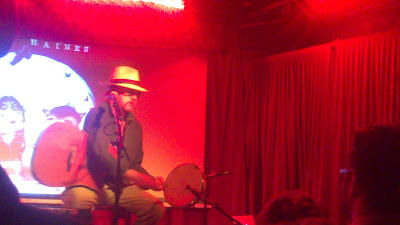 Long-term Haines fan with me was ecstatic to hear Leeds United, Baader Meinhof, and Lenny Valentino.. But, tonight, it was also, here we go again, satin wrestler suited feller (probably a drunken John Moore), passing round bonafide liver sausage sandwiches for the crowd, during the 'wrestling album' numbers, not a best Haines album effort to either of us (old fan and new) - albeit there are a couple of great saving graces of songs, and we did enjoy those. But really we wanted oodles of songs from the similarly recent but truly remarkable 21st Century Man album, and didn't get them, bar maybe one. The off-the-cuff seeming song about certain 60s/70s bands/singers being name-checked and all said to be 'righteous' was something I could pass on, if I'm brutally honest.
A quirky gig, with a lot of charm - just cut so short, and in need of more favourite songs.
Posted by All Thrills No Frills at 17:54