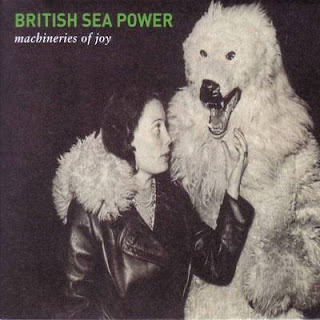 The new British Sea Power album is worth getting on vinyl - because you get a free CD of the album inside too! All my BSP stuff is on CD bar two little one-off singles, so I was a bit unsure when I got to Banquet Records and found they had no copies of the CD left (more due to come), and I wasn't banking on the £14.99 cost. But I had my loyalty card with me, and that knocked the price down, which was good - got new record needles, and a recent album by Gravenhurst into the bargain.

I had listened to the pre-release 'streaming' of the album before it came out, as I knew I wouldn't be able to buy it up on day of release (as I was out of the country - missed the band's cruise and gig party, but I had much needed sunshine to soak up). I wasn't sure I would like the album. I wasn't expecting so many of my favourite songs from the demo EPS to not be included, and some of the choices suprised me.

But it is growing on me more and more, and seeing them play live recently cemented it all really. The title track is just great. The video with the bike ride, and the images they projected live add to things - they've gone all nice, slow and thoughtful and epic sounding.

Spring has Sprung is an appropriate sentiment of a song finally, and it is my favourite song on the album - possibly closely followed by What You Need the Most, which conjures ballroom lights a-twinkle, slow-dancing.

I need to have an evening listening to the 6 demo EPs in succession, and then hearing the resultant album. But taken in itself, it is a refreshing sound; no other bands like them. Against their previous material (and I can do this, as I've been with the band since the earliest days of 2001, followed their changes and ascent), it is still very much the sound of a band that are precious to me, yet it's different sounding for them, development; and I'm glad.

Here is my latest BSP scout's patch (this band have the very best in merchandise):

At the gig, I gave in to buying a new BSP mug too. It seems essential getting-out-bed inspiration. It has a bee design, and something magical happens when you pour hot water in. The bee slowly fades away, and you're met with 'BEE' 'GONE' - alluding to both their song of similar (punned) name, and to the ailing bee population. Care for the environment - that is what I like in a band. On sale, the band also had a t-shirt that read BIPOLAR - two polar bears side by side. Onstage during the encore, we were treated to the sight of an 8 foot polar bear suited person stomping about, clspping its great paws, causing mischief. Doesn't get much better than this!
Posted by All Thrills No Frills at 09:35