This big creature was keenly overseeing the free barbecue at The Windmill in Brixton yesterday! 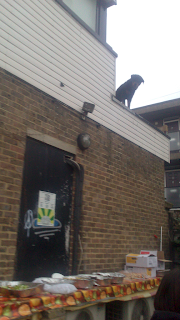 Good to go to an afternoon-into-evening gig on a Good Friday. It was much too cold to be having a barbecue, but on arrival we managed to eat vegetarian burgers and salads in the freezing outdoor garden - my friend with gloves on! There were about three terrifyingly large dargs on the roof as we ate, plus we got unwanted conversation from someone with a musical Noddy doll, which made for an unsettling start. 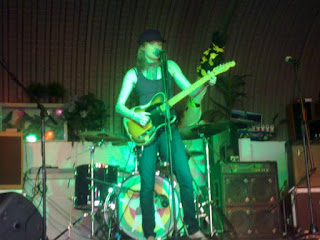 It was excellent to see Viv Albertine once again, though. Small wonder that she is playing somewhere as compact as this. She was greeted like a legend, by many, rightly, though. Her songs and lyrics are so off-kilter, funny, clever, political, great. She said she had arrived feeling grumpy, and had multiple technical problems - including us witnessing her getting electric shocks on her mouth so bad, she resorted to putting what looked like a sock over her mic. But her smile was as sunny as this Easter day in April should have been. She was inspiring and entertaining to watch, really reaffirmed my faith in things. I must definitely buy some of her albums at next financial opportunity.

Interestingly, I bought some old music magazines on a market recently - one of which was an edition of Q from late last year. Inside, there was a mock image of a cover of Q with Viv Albertine on the cover, saying if the magazine had been around in the late 70s, that's how it would've looked. Hello, Q! Viv Albertine is very much alive, performing, and kicking - so what's your excuse ?

(Above photo of Viv Albertine from the Strummerville event I went to a few years ago as didn't get to take any photos at the Windmill gig).

EDIT: Since I wrote this post, it's been announced that Viv Albertine has written an autobiography! This will be utterly superb, and I cannot wait. We need many more female rock musician biographies, there are not so many.
Posted by All Thrills No Frills at 12:04